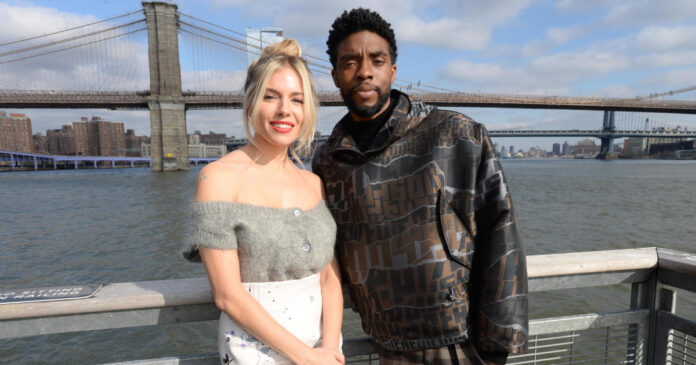 Chadwick Boseman posthumously graces the cover of Empire magazine this month, and the issue is filled with interviews and remembrance of the actor, who died in August after a battle with colon cancer. In the issue, actress Sienna Miller tells a story about the “Black Panther” actor that paints him as a real-life superhero.

Miller told Empire that Boseman, who co-starred in and produced the 2019 film “21 Bridges,” was a fan of her work and wanted her to be in the film. “So he approached me to do it, he offered me this film, and it was at a time when I really didn’t want to work anymore,” she said. “I’d been working non-stop and I was exhausted, but then I wanted to work with him.”

Boseman also pushed for her to receive a higher salary. He donated part of his own salary to boost Miller’s pay, the actress said.

“I didn’t know whether or not to tell this story, and I haven’t yet,” Miller said in the interview. “But I am going to tell it, because I think it’s a testament to who he was.”

Miller said she asked for a salary that the studio wouldn’t pay her. She noted the pay disparity between men and women in Hollywood and said she was hesitant to get back into acting since her daughter was just beginning school.

She said she would only do the film “if I’m compensated in the right way.”

“And Chadwick ended up donating some of his salary to get me to the number that I had asked for,” she continued. “He said that that was what I deserved to be paid.”

Miller, 38, said Boseman’s generosity was “about the most astounding thing” she has experienced. “That kind of thing just doesn’t happen. He said, ‘You’re getting paid what you deserve, and what you’re worth.’ It’s just unfathomable to imagine another man in that town behaving that graciously or respectfully,” she continued. “In the aftermath of this I’ve told other male actor friends of mine that story and they all go very, very quiet and go home and probably have to sit and think about things for a while.”

Miller noted there was “no showiness” when Boseman selflessly gave up some of his pay. He did it because he thought “that’s what you should be paid,” she said.

Since 2016, Boseman had been quietly battlling colon cancer – while also filming movies like “21 Bridges,” “Black Panther” and “Avengers,” and doing charity work. Few knew of his illness — not his co-workers, or young people he would often visit in the hospital.