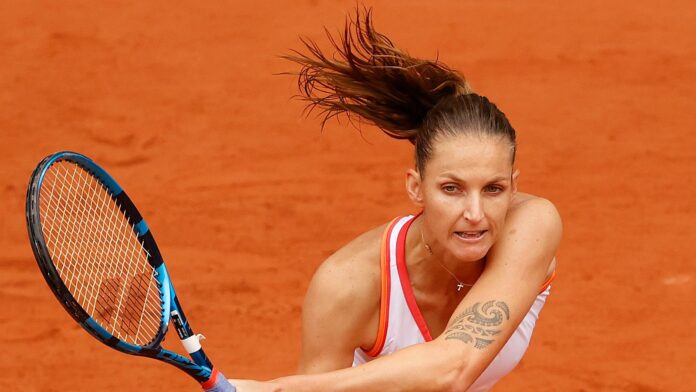 Karolina Pliskova survived a real battle against Egyptian qualifier Mayar Sherif in the first round of the French Open.

The second seed, who has been fighting to recover from a thigh injury that forced her to withdraw during the final of the Italian Open last Monday, was unable to take any of eight set points during the opener.

“Let’s not talk about my level. I think there is big room for improvement, but it is what it is and I’m in the next round, which counts,” Pliskova said post-match.

“Never giving up is the only thing which I can do no matter how it goes, because there is always a chance, especially against these players [qualifiers].

The Czech will next meet 2017 champion Jelena Ostapenko in the next round, who defeated American Madison Brengle 6-2 6-1.

“I think for them it’s really tough to close the match. Maybe they can play great two sets but three sets is quite tough.”

No easy matches at @rolandgarros 😰 Happy but humble 🙏 pic.twitter.com/KWzLfQBaS7

The powerful 17-year-old served for the match at 7-6 but failed to take any of three match points, the last one when her attempted drop shot hit the tape and fell agonisingly back on her side.

However, she refused to let her chance slide and broke Brady again before clinching victory on her fifth match point.

Tauson, this year’s Australian Open junior champion, blasted 48 winners throughout the contest and will face Danielle Collins in the second round.

Both players had to endure the frustration of an hour-long rain delay between the first and the second sets. Kenin also had to contend with her own high unforced error-count and an inspired opponent.

“I’m obviously really fierce and I’m not going to give up,” Kenin said after the match.

“I really love winning. I play to win. I get pretty hard on myself when I’m not winning and pretty upset with myself.”

At 5-1 up in the first set after just half-an-hour, Mladenovic had looked in control however her German opponent showed her tenacity.

Siegemund will play either the 19th seed Alison Riske and Goerges, next.