Home Culture Carole Baskin is eliminated from ‘Dancing with the Stars’ 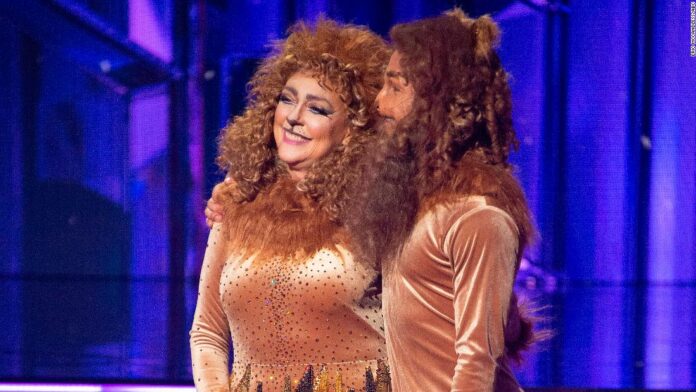 The eccentric big cat advocate of “Tiger King” fame was sent home from the ABC competition series, which pairs professional dancers with actors, athletes and TV personalities like Baskin and challenges them to ballroom dance each week.
This week’s challenge had the stars dancing to Disney classics, and, like the cat enthusiast she is, Baskin danced the samba to “Circle of Life” dressed as a frizzy lion.
Ultimately, judges Derek Hough and Bruno Tonioli chose to save Anne Heche and her partner instead of Baskin and her partner, Pasha Pashkov.
In a video pleading for votes released ahead of her elimination, Baskin appeared to acknowledge she was in trouble.
“Dancing is extremely hard for me, and I need all your votes I could possibly get,” she said.
When she’s not dancing, Baskin runs Big Cat Rescue in Tampa, Florida, where exotic cats, mostly tigers, live out their days after being rescued from captivity. Her work — and her feud with mulleted adversary Joe Exotic, who was jailed for her attempted murder — was spotlighted on the hit Netflix documentary “Tiger King.”
A dancer, Baskin is not. But she did use her time on the show to highlight the causes close to her, namely the Big Cat Public Safety Act, which would ban the public’s handling of cubs. It was introduced on the House floor over a year before “Tiger King” debuted and hasn’t been voted on.
Throughout her stint on the show, relatives of the late Don Lewis, Carole’s former husband who disappeared mysteriously during their marriage, ran ads seeking information about Lewis’ disappearance. His vanishing was a running subplot on “Tiger King.”
The case of Lewis’ whereabouts remains cold, though the Hillsborough County Sheriff’s Office said since the series premiered, it’s received at least six tips a day related to the case.

Europe Went Bananas for Gorillas. Then Its Workers Rose Up

‘Welcome to the world’: Former Made in Chelsea star gives birth to baby girl