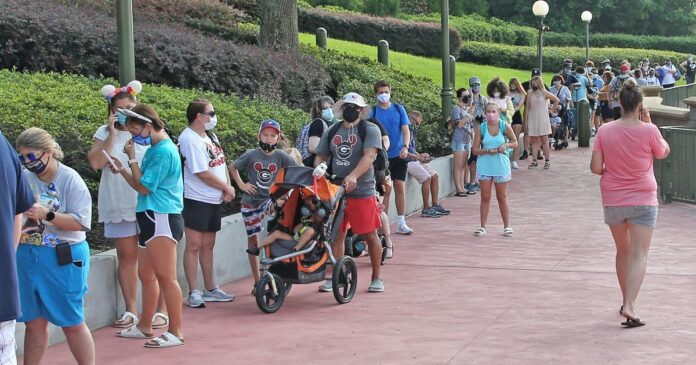 The Walt Disney Co. said Tuesday that it will lay off 28,000 furloughed workers in the company’s California and Florida theme parks as it moves to recover from a sharp financial blow caused by the coronavirus pandemic.

Disney Parks Chairman Josh D’Amaro said a closed Disneyland is partly to blame for impending layoffs. In a statement, D’Amaro said that roughly two-thirds of the workers who will lose their jobs work part-time.

“Over the past several months, we’ve been forced to make a number of necessary adjustments to our business,” he said. “And as difficult as this decision is today, we believe that the steps we are taking will enable us to emerge a more effective and efficient operation when we return to normal.”

It’s unclear if the layoffs will extend to Disney theme park in Shanghai.

In a letter to employees, D’Amaro tried to paint the layoffs as unavoidable. Shares of Disney have fallen 13% this year.

The pandemic, and forced social distancing, has certainly been a big drain on Disney’s park operations. But the company and its executives have inflicted some of their own wounds. To help limit the number of parkgoers, Disney rolled out an online reservation portal called Disney Park Pass in June. Visitors flooded the system on the first day and some time slots were sold out quickly.

When visiting Disney, all guests and staff members must have their temperature checked. Guests must also wear face masks except when eating. Some play areas at Disney World have remained closed and others attractions, including restaurants and stores, have reopened at reduced capacity.

Disney officials said the company would provide severance packages for many laid-off employees, but not all, and also offer other services to help workers with job placement.

Carrie Bradshaw is back – with another brilliant, bonkers wardrobe! Costume designers reveal secrets behind her style

Michael J. Fox on new memoir “No Time Like the Future: An Optimist Considers Mortality”

Jennifer Lawrence had to explain G.O.A.T. to Meryl Streep