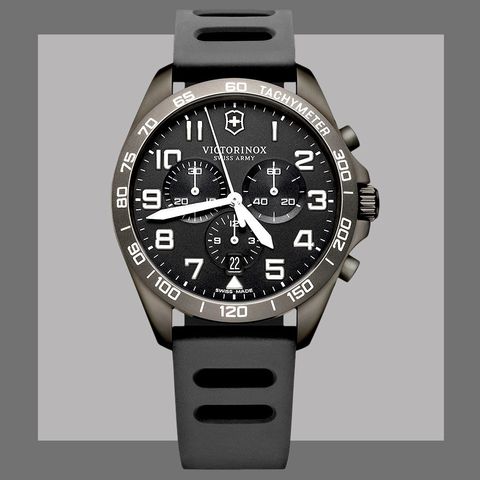 It’s easy to fall into the trap of believing, if you think about watches too much (and we certainly do), that only mechanical ones will cut the mustard. But watch snobs who think quartz movements are for a lower class of individual tend to miss out on some stellar watches and some killer deals too. Released just yesterday on the Victorinox website, for example, is the latest version of the FieldForce Chronograph, now in a very cool brushed matte black DLC steel. It’s a great everyday sporty watch with lots of bells and whistles—check out the triple subdials—and a very clean easy-read display with a strong SuperLuminova light emission at night. A Ronda (Swiss made) quartz movement keeps the price down to a very reasonable $575, but the real value here is the design.

Victorinox, the maker of the legendary Swiss Army Knife since the year dot, has been making watches since the late ’80s, when they debuted in the USA under the Swiss Army brand name. What makes Victorinox watches a sound investment is their reputation for durability. In fact, the company has something of an obsession for ruggedness in its watches, having developed a battery of 130 tests in 2014 specifically for its I.N.O.X. line of watches (another great quartz-driven buy from the brand, with a unique look all its own). Some of these tests were rather unusual, including driving over a watch on concrete using a 64 ton tank (in both forward and reverse), strapping it to the runner of a bobsled to test vibration resistance, and subjecting it to an artificial sandstorm. Not all Victorinox watches go through this full battery of tests, but the FieldForce officially goes through at least 100, which means it’s probably more than up to your daily grind. 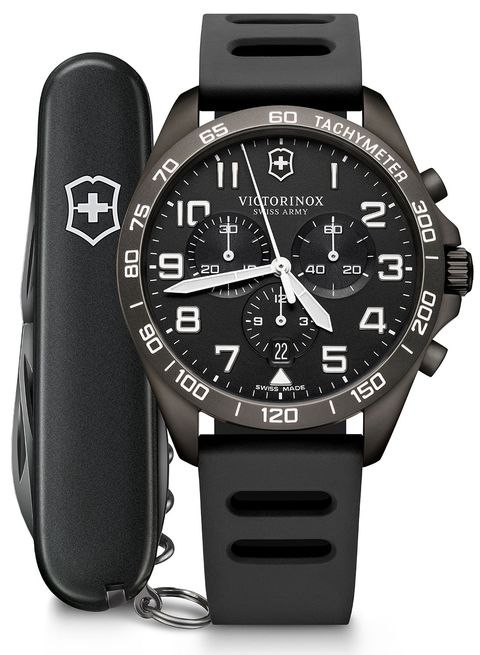 Yep, it comes with a knife.

Sure, there are plenty of cheaper watches, some of them even come with automatic movements. Whether they are any good, however, is open to debate. For our money, in this sweet-spot price range, a good quartz watch is a better buy than a bad mechanical one. And let’s face it, what other watch company gives you an actual knife with purchase?

A Puffer With Personality to Spare, Plus More of This Week’s Best Menswear Releases