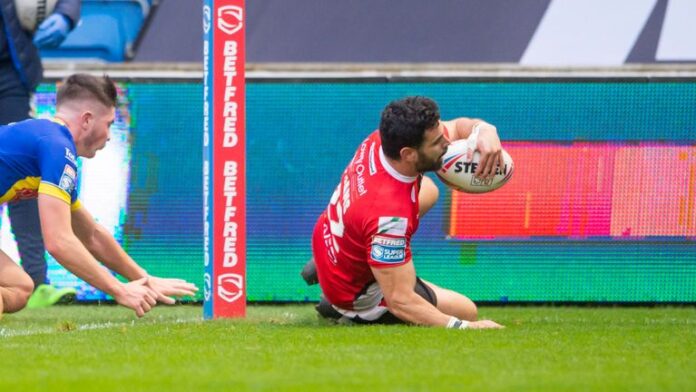 A debut try from Nathan Roebuck, plus further scores from fellow youngsters Josh Thewlis and Riley Dean, helped the Wolves into an 18-0 lead with 36 minutes gone.

However, tries either side of the break from Rhys Williams and Elliot Kear clawed the Red Devils back into the match and they drew level through a counter-attack finished by Tom Gilmore with nine minutes to go.

Inu saw a drop-goal attempt go wide and Dec Patton had one charged down for Warrington inside the final four minutes, but the Salford winger stepped up to kick the winning points when the visitors were pinged for offside.

The contest at the AJ Bell Stadium was a dress rehearsal for Saturday’s Challenge Cup semi-final but the teams bore little resemblance to the ones that will run out at St Helens.

Matty Davis and Danny Walker were the only Warrington players involved in last Thursday’s win over Catalans Dragons while Salford coach Ian Watson also took the opportunity to rest a handful of senior players in their bid to reach a first Wembley final since 1969.

Warrington coach Steve Price handed debuts to four youngsters in a side captained by Patton and watched them shake their more experienced opponents with their energy and enthusiasm and no little skill, particularly from 19-year-old stand-off Dean.

The warning lights were flashing for Salford when makeshift winger Sitaleki Akauola went through a gap in their defence in the 10th minute, only to be brought back for a forward pass.

There was also a suspicion about the pass from Dean that got one of the debutants, winger Roebuck, over for a try on 18 minutes that stood but there was no doubt about the sweet pass from Patton that enabled full-back Thewlis to score his second try for the club.

Second rower Ellis Robson also had a try disallowed for a forward pass as the young Wolves continued to do all the pressing and it was no surprise when Dean sliced through for a solo try on 34 minutes to add to their lead.

Patton kicked his third goal to make it 18-0 but Salford grabbed a lifeline just before the break when centre Kear gathered a kick from Tom Gilmore, one of three debutants in the Red Devils team, and fed his winger Williams for a try that Inu converted.

The elusive Dean almost got a second try early in the second half, referee Scott Mikalauskas ruling he lost the ball over the line, and Salford made the most of the let-off.

Jack Ormondroyd and Oliver Ashall-Bott were both held up over the line before Kear jinked his way over from dummy half on 51 minutes and Inu’s second touchline confirmation cut the gap to six points.

It was all square 10 minutes from the end when Gilmore supported a break from substitute hooker Andy Ackers to score Salford’s third try.

Inu failed with two drop-goal attempts to break the deadlock as extra time loomed but he was on target with a penalty after the visitors were pulled up for offside in front of their own posts.