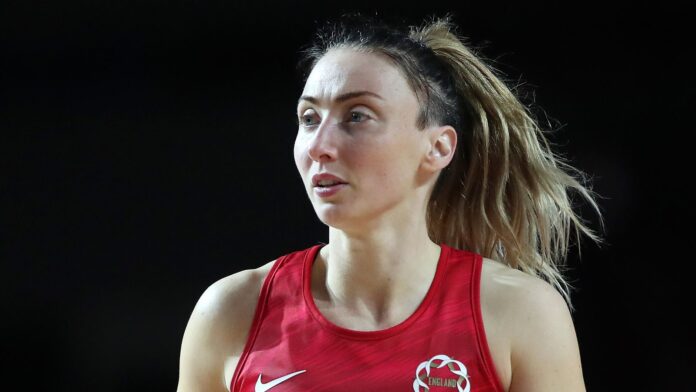 Clarke made her international debut in 2002 and is preparing to add to her tally of 176 international caps during the Vitality Roses forthcoming tour of New Zealand at the end of the month.

The 36-year-old, who is one of the most respected players in world netball, joins on a one-year contract from Wasps Netball.

Clarke, who has competed at four Commonwealth Games and five Netball World Cups, arrives at the new franchise having played at the highest level in three different countries.

Ryan hopes to emulate pro teams of Aus and NZ

Earlier this week, Leeds Rhinos Netball’s high performance director and head coach Dan Ryan spoke about the franchise’s working environment and Clarke is the perfect individual to set the standards within it.

“Jade is an absolute legend of the sport and her longevity to stay at the top of her game for so long, is simply inspiring,” Ryan said of his new signing.

“We are incredibly proud to have her sign with us as an inaugural Leeds Rhinos athlete.

Jade brings with her so much valuable experience and knowledge and I know she’s going to have a positive impact in driving performance standards and helping to build a really successful team culture in our foundation year.

“Jade’s an absolute workhorse, her dedication and drive is unrivalled, and her professionalism is always first class,” he added.

“She is one of the most respected individuals in netball and I can’t wait to work with her again and see what we can all create and achieve together in 2021.”

Ryan and Clarke first worked together during their time at Adelaide Thunderbirds and the mid-court player, who won Commonwealth gold with England in 2018, is also eager to resume that working relationship.

“Dan is a creative coach and I know he is building something special at Leeds and I can’t wait to get started,” Clarke said.

“This is an opportunity to be part of something new and to build our own culture and environment. I’m looking forward to being part of the exciting group of players that Dan has recruited, to learn from them and also to help them grow.

“I am hoping I can build relationships with young Roses players and to be a role model for the youngsters in the area and help grow the pool of talent.”

The 2021 Vitality Netball Superleague season is scheduled to start in February next year and Clarke will join up with her new franchise’s pre-season programme following her return from England’s tour to New Zealand.

Tamsin Greenway, who has played with and coached Clarke, believes this is an exceptional signing for Leeds Rhinos Netball and the mid-court player will add significant value to her new franchise.

“It’s a huge pick up for Rhinos. Although they say that shooters win you games and defenders win you championships, speaking from experience the play-makers in the middle make the vital little differences,” she said.

“When it comes to the crunch, Jade is the player that you want, she will get you that last-minute intercept, deliver a pinpoint pass, or the grind down the opposition.

“Jade’s experience both on and off the court is a massive win for Leeds, as starting from scratch it’s so important to have players that have not only been there and done it, but that will help you develop the culture you want moving forwards.

“You want that delivered from day one and as a team-mate you couldn’t ask for any more from her.”

There are always two sides to the coin when it comes to players moving franchises and in this case, Wasps Netball are the ones left with a gap to fill. Greenway believes it will be interesting to see their next move.

“It’s a massive hole for Wasps to fill, as over the past few seasons they have lost Natalie Haythornthwaite, Bongi Msomi and now Clarke.

“Jade was playing back at her very best. Both her and Amy Flanagan became one of the toughest mid-court lines to break down and defensively Wasps now have a big rebuild on their hands.

“It’ll be interesting to see whether they have kept the rest of the core group together and how this plays out for Sophia Candappa and Iona Darroch,” Greenway added.

“When you become an older player, new challenges and excitement are what keep you pushing on. Dan Ryan’s style will suit Clarke’s game down to the ground and now, it’s all about who’s going to be lucky enough to play with her and learn alongside her.”