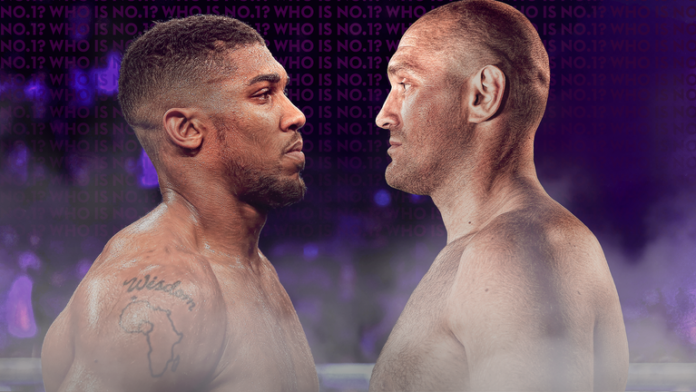 Anthony Joshua has questioned why Tyson Fury has not been in “more challenging competitions” because his rival’s career has been so much longer.

IBF, WBA and WBO champion Joshua and WBC title-holder Fury have agreed terms to two fights in 2021 to decide an undisputed heavyweight ruler, with promoter Eddie Hearn suggesting contracts are nearly ready to be sent out.

Fury is a year older at 32 but began his pro career five years earlier – Joshua insists his rival has not been in enough major fights.

“Remember, he was a heavyweight well before my time,” Joshua told Sky Sports.

“He turned professional in 2008. That was the year I had my first amateur fight!

“I never thought I would catch up to Fury. He was never someone that was on my radar.

“So I’ve never known Tyson until I turned professional and started barking at the heels of these heavyweights who were docile.

“I started bringing some heat. Now they became relevant in my life.

“My relationship with Tyson is only because I progressed as quickly as I did, and he didn’t progress as quickly.

“Over a long period of time, a career that has spanned 12 years, I would have liked to have seen him in some more challenging competitions.

Before the undisputed title can be decided between the British rivals, they must each get through an upcoming defence.

Joshua will put his belts on the line against mandatory challenger Kubrat Pulev, targeted for December 12, and Fury is contracted to a third fight with Wilder.

Joshua said: “Providing I get past Pulev, what more can I do to prove that I am ready to fight Fury?”

How close is Joshua vs Fury?

Joshua’s promoter Eddie Hearn previously told Sky Sports: “I’m very sure you’re going to see two versions of that fight in 2021. I think we’re on the verge now of papering that deal with (Fury’s US-based promoter) Bob Arum. We haven’t done it yet, but all the conversations are positive.

“We have a lot on our plates with the pandemic, making sure we keep boxing alive and trying to deliver those fights for AJ and Fury, but I think 2021, I’m very sure you’ll see those two fights.”

Top Rank president Todd duBoef told Sky Sports: “There is a gravitation to bring the titles together, and that would be Joshua and Fury. Obviously we would have loved to do that before the end of this year, but for the pandemic.

“Both guys have great personalities, they can fight, and it is overdue. Let’s get it done.”

What are the obstacles?

Aside from their next challengers, Pulev and Wilder respectively, Joshua and Fury have other mandatory challengers to juggle.

Oleksandr Usyk is the mandatory challenger to Joshua’s WBO belt and his co-promoter Alexander Krassyuk told Sky Sports: “He has agreed to let AJ versus Pulev happen, with regards that the winner fights him next. This statement is still solid.”

Alexander Povetkin became the mandatory challenger to Fury’s WBC title when he knocked out Dillian Whyte.

He will defend that status in a rematch with Whyte on November 21, live on Sky Sports Box Office.

Povetkin’s promoter Alexander Ryabinskiy told Sky Sports they want to fight Fury: “We will work in this direction.

“The fight for the world title is a big event in the career of any fighter, and with every reason for this, of course we will seek a mandatory defence from the WBC.”