Home World In Trump-Biden debate chaos, China and other opponents of democracy are the... 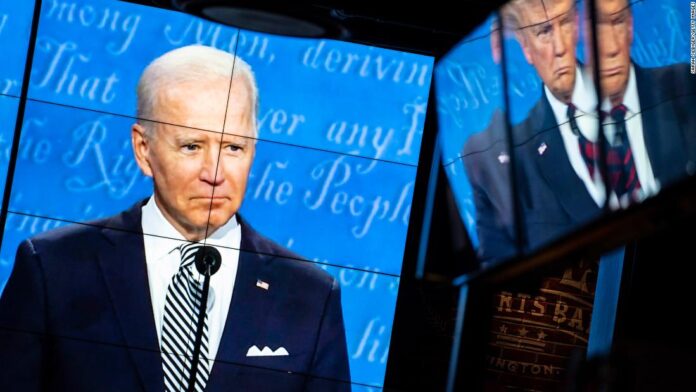 Both criticized the other for being too soft on Beijing, with Trump accusing Biden of being hoodwinked by China during his time as vice president, and Biden hitting Trump for saying “what a great job” Chinese President Xi Jinping was doing at the beginning of the coronavirus pandemic.
But while Beijing would rather not be a topic at all in the United States election, and this rare consensus represents a growing anti-China strain in Washington, the debate as a whole will have raised spirits in the Chinese capital.
For decades, Beijing has criticized US-style democracy, holding up (very real) flaws in the American system as vindication for Chinese authoritarianism. Anyone advancing reform or liberalization in China is forced to answer for every failure in the US, and made to justify why that will be better than the Chinese system, which may not offer much in terms of representation, but at least provides stability and economic growth.
On Tuesday, Trump helped to bolster that view, and in turn, further erode global confidence in US-style democracy.
During an extended barrage of misinformation toward the end of the debate, Trump attacked mail-in voting and urged his supporters “to go into the polls and watch very carefully” for what he implied could be an attempt to steal the election.
“This is going to be a fraud like you’ve never seen,” Trump said. “This is a horrible thing for our country. This is not going to end well.”
While Trump has made similar claims already in the campaign, it was still somewhat astonishing to see a sitting US President essentially rail against the electoral system itself, implying that it is broken or easily manipulated, and setting up a potential ugly fight over the eventual result.

A gift for critics of democracy

For decades, the US has actively advanced its model of democracy around the world, be it through soft-power, concerted civilian-led initiatives or raw military strength. Part of the justification for apparent US hegemony is based upon the idea of American democracy, that the US is a superpower unlike the British or Soviet empires because it is representative and its elections are free and fair.
While the record shows plenty of gaps between Washington’s supposed values and how US leadership plays out in reality, the existence of a democracy as the world’s strongest power did give some credence to the system in general, much to the chagrin of authoritarians in Beijing and elsewhere.
Trump, however, has been a gift for such critics of democracy. Not only did he take office despite losing the popular vote, due to America’s antiquated electoral system, but he has also advanced isolationalism and withdrawn the US somewhat from world affairs, all the while praising various strongman leaders around the world, including Xi and Russian President Vladimir Putin.
In 2016, following a debate between Trump and then-Democratic nominee Hillary Clinton, People’s Daily, the mouthpiece of the Chinese Communist Party, mused “no matter who wins, US presidential election reveals ‘ill’ democracy.”
It was hard to watch Tuesday’s debate and think anything has progressed in four years. Chinese state media coverage noted the ugly tone, with China Daily saying “the debate seemed to reveal a genuine dislike between the two men, with no pretense of decorum.”

‘No pretense of decorum’

But beyond simply the chaos, and moderator Chris Wallace’s apparent inability to keep control, Trump’s misinformation and conspiracies about potential mail-in fraud also poked holes in the validity of the system itself.
Biden could often do little in the face of this barrage but call Trump a liar and urge people to cast their ballot.
According to Republican pollster Frank Luntz, who was overseeing a virtual focus group Tuesday, “this debate has actually convinced some undecided voters to not vote at all.”
If Americans are feeling demoralized after Tuesday night’s chaos, how easy will it be for critics of the US — in China, Russia and elsewhere — to seize on the debate to make their points, whether about problems with Washington, or the very system of democracy itself?
Reacting to the debate, Hu Xijin, editor of the nationalist state-backed tabloid Global Times, wrote that “such a chaos at the top of US politics reflects division, anxiety of US society and the accelerating loss of advantages of the US political system.”

W Algarve to take brand into Portugal next spring