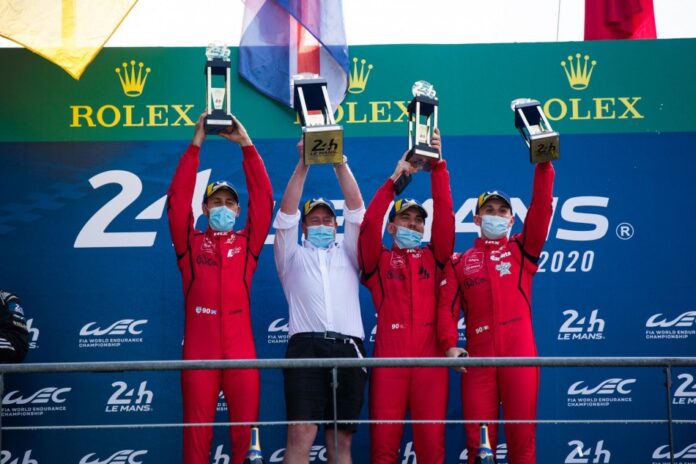 At the 2020 24 Hours of Le Mans he led TF Sport and drivers Salih Yoluc, Jonny Adam and Charlie Eastwood to victory in the LMGTE Am class Aston Martin Vantage. The team and drivers are now on the cusp of adding a world title as they are leading the FIA World Endurance Championship LMGTE Am category with one race in Bahrain remaining this November.

We caught up with Tom Ferrier a week after Le Mans to get his reaction to winning the world’s greatest race.

Q: How does it feel to lead your team to a 24 Hours of Le Mans title?

TF: “Honestly, it hasn’t sunk in. It’s been a dream for a while and now we have made it a reality, it will take some time to understand what we have done.”

Q: As a former driver, was this race difficult for you to watch from the garage or the pitwall?  Did you wish you were out there behind the wheel?

TF: “It’s much easier to criticise from the pit wall! I’m not sure how the drivers do it in the night. To be honest, the challenge of running a team keeps the competitive edge and that satisfies me.”

Q: TF Sport won the Michelin Le Mans Cup in the first season.  How important was this first step on the ACO ladder for the eventual victory at Le Mans?

TF: “To be honest I don’t think without us competing in that, we would have followed down this route as strongly. It gave us our first opportunity at Le Mans and as soon as I was there for the first time running a team, I knew it was where I wanted TF to be competing for a long time.”

Q: It was also the first win at Le Mans for a Turkish driver.  Salih Yoluc has been with TF Sport for many years from GT open, Michelin le Mans Cup and on to the WEC.  Is it very satisfying to see someone like Salih grow with your team?

TF: “Salih is just an amazing guy. His commitment to the sport is huge. I’m so happy to see him tick this massive box. We have had some tough times, but his rate of improvement from 2016 is huge and he deserves this so much.”

Q: Let’s not forget the engineers, the mechanics and the support staff without whom the car wouldn’t have got to the finish line.  You must be very proud of your entire team?

TF: “Even reading that question makes me want to cry, I am so proud of all of them! It’s not just the people at Le Mans, but also the guys working other programs that give everyone the flexibility to be able to do their job. I am so lucky that I get to go racing with some of my best mates. It makes winning so much better.”

Q: The next race in the WEC is the season finale in Bahrain. TF Sport now head there as championship leaders with an 8-point advantage over the no83 Ferrari crew.  Is it going to be a tactical approach to the race or is it go for the win and let the points take care of themselves?

TF: “The latter. We have won a few championships now and I think we know that you just go to win the race. If we do that, we will be champions. Oh, and it’s my birthday!”