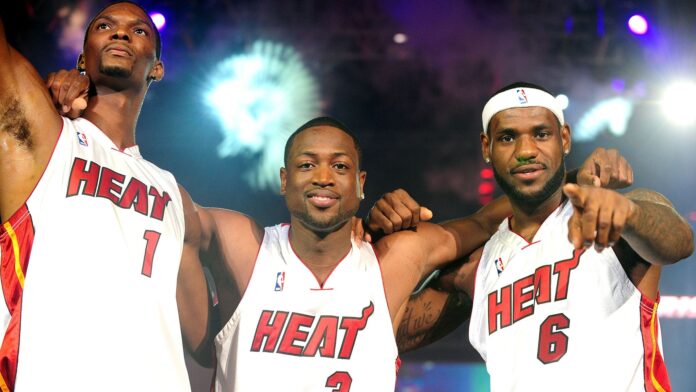 LeBron James facing his former team the Miami Heat could make for an emotional NBA Finals but the series is certain to produce elite-level basketball.

Two championships out of four trips to the Finals isn’t bad – in fact, it’s very good. But it was not supposed to be just two.

Nobody knows how many NBA championships LeBron James intended to win for the Miami Heat when his voice drifted off while speaking in front of a crowd at the American Airlines Arena in 2010, but it certainly wasn’t supposed to stop at two.

Alongside Dwyane Wade and Chris Bosh, the ‘Big Three’ sat in matching high chairs, decked out in the same white uniforms, looking like a boyband before a key change – they were ready to take over the NBA. But like many great pop groups, the most talented one left to launch a solo career while the others tried to keep the band back together after back-to-back classic hits in 2012 and 2013.

There were good times to look back on fondly, but there was animosity leading up to and following the break-up. During the end-of-year press conference, after missing out on the championship in 2014, Heat president of basketball operations Pat Riley made some pointed comments that suggested he knew his three leading men were no longer going in the same, one direction.

“This stuff is hard,” he said. “You have got to stay together if you have got the guts. You don’t find the first door and run out of it.”

In Riley’s eyes, James did just that. He won another championship with the Cleveland Cavaliers and sauntered out after another four straight Finals appearances to land with the Los Angeles Lakers as a solo act.

Meanwhile, Riley worked with Heat coach Erik Spoelstra to rebuild. The team attempted to re-tool around Wade – until he flew the nest to hunt for titles – and Bosh – who was forced into early retirement due to blood clotting issues. Trying to stay competitive meant they never had a draft pick higher than 10 during the intervening years, but they found diamonds in the rough and gems off the scrapheap to build a solid base of scrappy players with bags of potential.

Last season, Bam Adebayo played behind Hassan Whiteside and started fewer games than Kelly Olynyk. This year, the third-year player was an All-Star and earned a spot on the All-Defensive team. He played 10 minutes more than the 2018-19 season, increased his scoring by seven points, and nearly three points and three rebounds.

Sophomore Duncan Robinson and rookie Tyler Herro are among the best three-point shooters in the league. Veteran Goran Dragic continually flies under the radar as one of the most unsung point guards in the world, and they have some of the best defenders in their roles, including Jae Crowder, Olynyk and Andre Iguodala.

Then, last summer, the Heat signed Jimmy Butler, the multi-time All-Star who had a history of ruffling feathers. That competition-at-all-costs mentality might have upset a few people during his previous stops in Chicago, Minnesota and Philadelphia, but for a team of hard workers and young competitive players who had points to prove from slipping in the draft, as well as veterans who know what it takes to help keep those players in line, he is the perfect emotional driver for this squad.

Miami have a complete team. It’s a far cry from Spoelstra’s first run at the Finals managing James, Wade and Bosh, who were the only three on the 2014 roster to average double figures in scoring. Across the 2019-20 regular season, the Heat had seven players scoring in double figures, swapping Justise Winslow for Crowder halfway through the season.

On the other side of this Finals match-up is the one-two punch of James and Anthony Davis, who the Lakers traded in all their draft selections for last summer. During the regular season, the gap between the second leading scorer (James) and the third-leading scorer on the Lakers (Kyle Kuzma) was a massive 12.5 points per game. Only one team had a bigger gap between the second and third leading scorers, the Houston Rockets, and the next nearest team was the San Antonio Spurs, with a 7.3 discrepancy between Patty Mills and LaMarcus Aldridge.

Simply put, the Lakers are top-heavy, and they are going up against a supremely well-coached defensive team that produces offense by committee. It’s not dissimilar to the 2004 Finals featuring Shaquille O’Neal and Kobe Bryant, who went up against a defensively-supreme Detroit Pistons that finished the Lakers off with a 4-1 series victory.

But that was the end of a dynasty – this year is the start of something new for the Lakers.

James has won three championships in his career, but it will be his 10th Finals appearance in the past 14 seasons, and he is more focused than ever. At Finals media day, he said: “I never had a problem with any team I went to the Finals with. I’ve always been confident that we had the ability to win.

“The game is won between the lines, not on paper. At the end of the day, when I’ve lost in the Finals, the better team won because they played well, they were more prepared and they did what they needed to do to win those four games. When I’ve won, the same thing.

There were reports in recent years that James and Riley hadn’t spoken since the break-up. At Spoelstra’s media availability, the coach shared how tough it was for the Heat to lose James in 2014 while retaining ambitions to return to the Finals without him the following season, only to miss out.

“I went through my own six-week reflection period that summer,” he said. “We have been conditioned to move on and give everything, your heart and your soul to the next group and the next team. That’s what this game does to you sometimes; it breaks your heart. That year really broke our heart.”

Emotional situations need to reach fever pitch before they can be resolved. You need to come face to face with the issue to move on.

James will meet the Heat, his former coach, and the team president who was so “p***ed” after the team lost the Finals in 2014. But just like when Robbie Williams and Take That overcame their differences through song, the baggage between these two parties could ultimately be resolved on the court.

Without needing to break out the acoustic guitars, we have the great privilege of seeing some great basketball in the next week or so. It will be played by two of the greatest offensive players in the game today and their backing group against a perfect ensemble of complementary players.

The difference in styles, the coaching talent, the list of All-Star talent; both teams are looking for the first championship with their respective core rosters – but the first of how many?

Watch Game 1 of the NBA Finals between the Miami Heat and Los Angeles Lakers live on Sky Sports Arena in the early hours of Thursday morning (1:45am), full replay at 8am