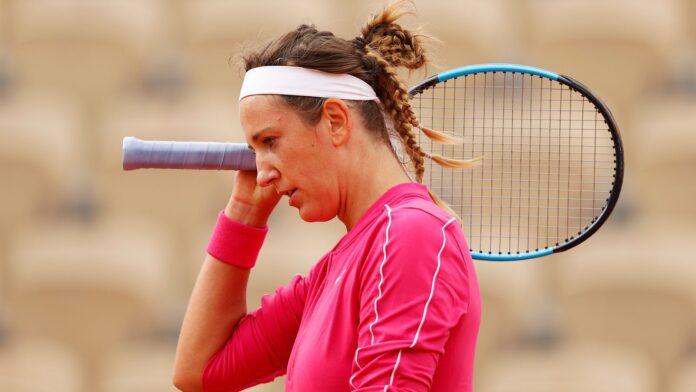 On the day that Serena Williams was forced to withdraw due to injury, her US Open semi-final opponent Victoria Azarenka crashed out of the French Open.

The Belarussian, who moaned about the cold and damp conditions during her opening round win, capitulated on Court Simonne-Mathieu and lost 6-2 6-2 to Slovakia’s Anna Karolina Schmiedlova.

Prior to Schmiedlova’s first-round win over Venus Williams, she had lost 13 consecutive Grand Slam matches in run which dated back to 2015.

Serena Williams has withdrawn from the French Open ahead of her second-round match against Tsvetana Pironkova due to an Achilles injury.

Schmiedlova took full advantage of Azarenka’s 36 unforced errors and the fact that the Belarussian could not convert a single break point that she created (0/5).

She will face Nadia Podoroska in the third round, who beat Yulia Putintseva 6-3 1-6 6-2.

Zarazua, who became the first Mexican woman to win a Grand Slam main draw match in more than 20 years in the first round, made a nervous start as Svitolina took the opening set with three breaks of serve.

The 26-year-old third seed then lost her way completely and was duly handed a bagel to level the match.

“Maybe I was dreaming today,” Svitolina said after.

“Honestly, I’m still questioning myself because it was a bit of a drop. I don’t remember much of the second set… It’s very tough to say. I was going maybe for too much.”

The world No 5 did manage to re-group and once she moved back into the driving seat, she won 16 of the last 20 points to secure victory.

Guts and grit. That was some effort, @kikibertens.

The match contained no less than 24 breaks of serve, including a run of 10 in succession, and Bertens managed to save match point in the third set.

If she is fit, then she will face either Anastasia Pavlyuchenkova or Katerina Siniakova in the third round.

Amanda Anisimova had a much easier time of it on court against Bernarda Pera. She needed just 57 minutes to record her 6-2 6-0 victory.

The teenager will now be preparing to up her game again as she faces either Simona Halep or Irina–Camelia Begu in the third round.

Selby crashes out to Iranian world No 63 in York