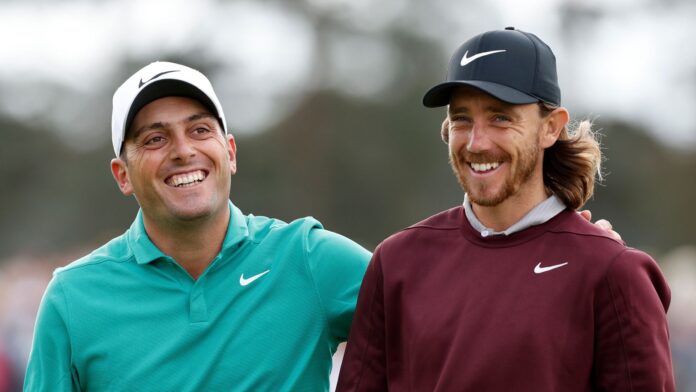 Watch the Scottish Open live on Sky Sports Golf from 11.30am on Thursday

Tommy Fleetwood is backing his record-breaking Ryder Cup partner Francesco Molinari to regain the form that made him “the best golfer on the planet” in 2018.

Molinari’s performances have dipped alarmingly since the Masters last year, when he held the lead for much of the tournament until struggling over the final seven holes in the final round, finding water at both the 12th and 15th to open the door for Tiger Woods.

The Italian, was imperious in 2018 as he won three titles, including The Open at Carnoustie, and he went on to become the first European to win all five of his matches at the Ryder Cup in France.

But the 37-year-old has not managed a top-10 finish since his Masters disappointment and has played only four times this year, missing the cut in his first three starts and languishing in a tie for 53rd at the WGC-Mexico Championship in February.

Molinari has not played any competitive golf since the coronavirus shutdown and has relocated to California from London, but he assured his fans earlier this month he was working hard on his game and Fleetwood has no doubts his close friend will be back among golf’s elite players.

“I think he’ll be looking forward to coming back,” said Fleetwood ahead of this week’s Scottish Open. “They have done that move now, and he can start progressing to where he wants to play again and stuff.

“I think everybody will be happy to see him, but I think he’s just taking care of things that he knew he wanted to do and the family wanted to do, and then he’ll be back very soon, I’m guessing.

“In golf, as in life, you go through great spells, and for six, seven months, he was the best golfer on the planet pretty much, not far off. I think everyone had expectations, and they’re huge for somebody like that when he’s playing like that.

“He’s gone through a slight loss of form, and then this all happened, Covid and everything, and he’s moved house.

“I’ve had my good times and poor times in my career so far. I’m sure my poor times will come again like everyone else, but he’s far too good to not win again and start playing well again.”

Fleetwood’s own form has been patchy post-lockdown, with signs of good progress in a podium finish in Portugal negated by a missed cut the following week at the US Open, although he admits adapting to a “funky” schedule this year has been difficult.

“I just think there’s been changes that have been out of our control,” he added. “I could easily take it for granted at the point where we are in the year, where the schedule is funky and things have changed, but I think it’s easy when you’ve played for a while now to take it for granted that we are playing all the time.

“It is different and it’s a strange year but at the same time, turning up week in, week out with a chance to play golf tournaments, to win golf tournaments, to win majors, that’s the way you’ve got to look at it. Things are different and a bit weird, but it doesn’t actually stop you from having the ability and having the chance to have a great season still.

“There are still plenty of good events to play, I had a long spell in America, but I feel like I’ve learned a lot from things being taken away from you or things being slightly different and I think I’ll take them with me forever.”