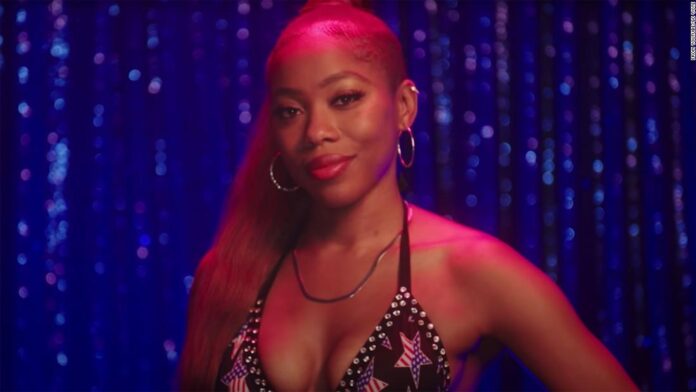 “It’s killing me that somebody hasn’t done this before me, like: why?” she told CNN. “It was easy to figure out and I have no background in politics or marketing. So why is it so viral? Why is because, in general, black people are ignored and taken for granted.”
With its catchy song composed by Steve G. Lover and produced by Chemist, “Get Your Booty to the Poll” has indeed gone viral.
The video has been both hailed for it’s promotion of down-ballot issues and criticized for it’s use of the scantily clad dancers taking to the pole for a lesson in civics.
Barnes is an Atlanta-based TV director and said the idea came about after she and some other friends in the industry across the country started talking about what they could do in the wake of both the death of George Floyd and the coronavirus pandemic.
The directors like her who live in Georgia wanted to do something that was clearly related to their area, she said. But all of the ideas they came up with needed big budgets, something the friends didn’t have.
“I was like we need something that people are going to want to share on their own without us having to pay to get it out there,” Barnes said. “We are going to want to do something that’s informative and specific to who we are talking to and I go ‘I want it to be Atlanta, I want people to know it’s about Atlanta.’ Then I said ‘I don’t know, like Magic City dancers saying get your booty to the poll.”
That casual comment started an excitement and the group put up a GoFundMe campaign which quickly raised thousands of dollars.
But Barnes and her producer Paul Fox weren’t just trying to be provocative.
They consulted organizations including the Black Male Voter Project whose founder W. Mondale Robinson provided them with information they used to craft a message to target their intended audience of Black men who don’t believe voting is important.
The result is a PSA which addresses the importance of voting beyond just the presidency, as down-ballot races can determine everything from who serves as district attorney to school board membership.
A volunteer crew worked on the production and Barnes said it cost a little more than $12,000 to shoot, a big portion of which went to paying for strict Covid-19 protocols to keep everyone safe.
There was also the side benefit of being able to pay the dancers — many of whom had lost work because of the pandemic.
Coy Malone is one of the dancers who participated.
She ad-libbed one of the PSA’s most popular lines: “But you talking about, ‘Awwww they gonna pick who they gonna pick, shawty,'” which got a big thumbs up for it’s use of the slang “shawty” which is total Atlanta speak.
Malone said she was happy to use her talents for such an important message.
“I wanted to participate because I was already having conversations on Facebook and Instagram and in person with people that just were not informed about what is actually on a ballot,” she told CNN.
“A lot do not understand that when you’re voting, you’re also electing judges, you’re selecting (district attorneys), you’re voting on taxes you’re voting on laws. And I just really wanted to have something out here that summarized this message.”
It’s a lesson she said she learned attending high school in unincorporated Decatur and researching how it was different from incorporated Decatur.
“And I learned that unincorporated Decatur lacks so many different resources because the community was just not incorporated with its own government system, it’s own laws, it’s own law enforcement and things like that” Malone said. “Meanwhile incorporated Decatur looked beautiful, the streets are clean, the schools had a lot of different resources and things of that nature.”
“So I started thinking like, what is it that I could do within this community to get this area incorporated, because we’re lacking so many different things,” she added.”It just kind of grew from there.”
Both Malone and Barnes understand the criticism aimed at their project, but see beyond it.
Malone said she simply focuses on the intent and message of the PSA “which is everybody needs to show up at the polls and vote.”
“We’re an audience and a people that don’t think we have power or a say so or a big influence on the world,”she said. “And we do.”
“It bugs me that had we wrote a song called ‘Get Your Booty to the P-O-L-E’ and not talked about politics at all people would have just thought it was a bop and not had a problem with it,” Barnes said.
“For me, Black lives matter and that means all Black lives matter, not just ‘respectable’ Black lives.”