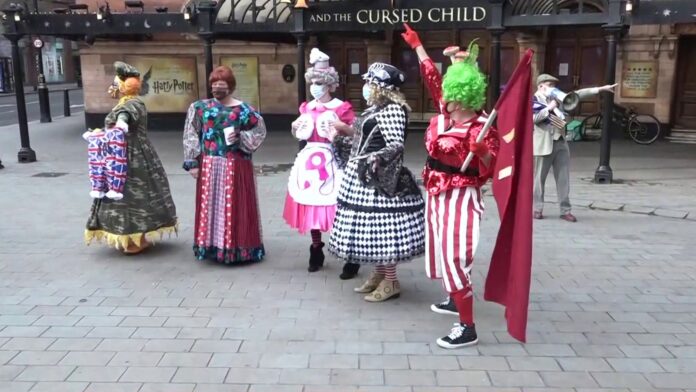 Panto dames have warned it is too late to save most pantomimes this year, and the future of the industry is in peril.

More than 150 dames and creative workers took part in the panto parade, calling on the government to take action to save “an industry on its knees”.

The colourful characters marched through theatre-land in London, and down to Parliament Square. The mood was light, but the message could not have been more serious.

It is part of a day of action arranged with the #WeMakeEvents campaign, which is appealing to the government to offer a “lifeline” to the entertainment industry.

Dame Gakko came down from Barrow-in-Furness to take part, telling Sky News he was missing performing in panto for the first time in 35 years.

He warned if people working in the sector, many of whom are freelance and have received no support so far, did not receive something soon, they would have to leave just to pay their bills, eat and survive – which would be “a tragedy”.

“Our industry is currently on its knees and if the situation isn’t managed now, if this government, this chancellor and this PM doesn’t save this industry, there’ll be no theatres and there’ll be no artists,” he said.

The march was organised by unions Bectu, Equity and Excluded UK, who are collectively asking the government for a number of measures – including targeted financial help for workers.

They are also looking for insurance for live events and theatre performances, and a subsidised scheme similar to Eat Out to Help Out.

Head of Equity Paul Fleming told Sky News the situation was critical for many workers, with 40% of its 48,000 members having received nothing for the last six months.

Fleming accused Chancellor Rishi Sunak of being the “only pantomime villain performing this Christmas” and said the lack of support would mean “a Christmas with no rent, no food and exiting the industry” for those who weren’t independently wealthy.

Head of Bectu Phillipa Childs agreed that her members were “very desperate” and the industry was at a “critical moment”. She too told Sky News very talented people would be leaving the sector because they had no alternative unless the government steps in.

Theatres rely on the panto season for their survival, with Christmas ticket sales subsiding the rest of the year’s shows and equating to around 30% of their annual turnover.

In August, the Hammersmith Lyric theatre announced it was postponing this year’s panto to 2021.

Artistic Director Rachel O’Riordan told Sky News “it is devastating for us financially” because it plays such a bit part in the theatre’s economic model.

She also admitted the Christmas tradition forms a huge part of the theatres identity and it was a “huge blow” for them not to be able to stage one this year, not least because it provided 36 freelancers with work.

She said panto was hugely important for the local community, bringing people together and providing many children with their first introduction to theatre.

“If we believe arts matter, which I passionately do, then there has to be an opportunity for people to come to a panto, it’s a magical thing, you’re transported somewhere else”.

Lord Webber: Theatres at point of no return

Ms O’Riordan told Sky News this was the most challenging period in the theatre’s 125-year history, and it would be devastating if they did not survive.

She stressed their future was vital “not just for the economics, but for the spirit of the UK and the country”.

The Lyric Hammersmith is due to stage Aladdin in 2021.

The government announced a £1.57bn rescue package for the arts in July, which it is yet to receive.

It may save some theatres, as it will be going principally to museums, galleries and venues, but the creatives behind these institutions argue they need more to survive.