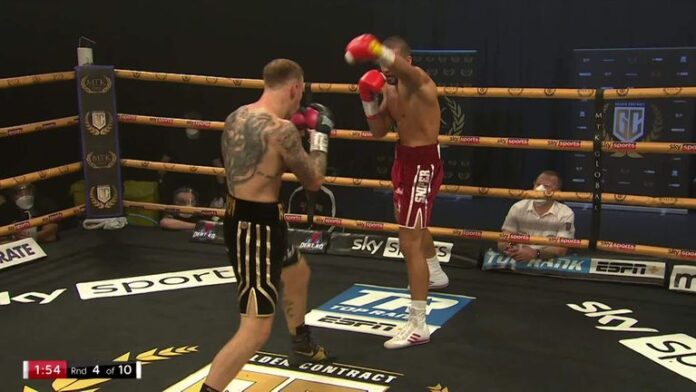 It was a career-best victory for Davies, one of British boxing’s most divisive characters, who had watched a replay of his ignominious defeat to Josh Taylor just hours earlier to motivate himself.

McKenna was immediately content to remain cautious on his back foot and Davies was forced to be patient as he sought a chance to engage.

Davies’ punches were more eye-catching and hurtful when they landed but McKenna was doing a good job of evading most of them and returning fire with point-scoring shots.

Davies landed a strong right hand in the fifth round which McKenna impressively walked through.

McKenna, in the second half of the fight, worked from his front foot in order to pressurise Davies and assert some control.

Davies stormed back with some solid jabs in the eighth, by which time McKenna was cut above the eye.

The judges favoured Davies’ aggression (the scores were 96-94, 96-94, 95-95) and he took home the WBC international super-lightweight belt, too.

“I’m on top of the world!” 🌎👑@OharaDavies has some pretty extravagant plans for his post fight meal… 😂

Takeaways of Wakefield watch out 😅 pic.twitter.com/utYXvWhY21

Liam Conroy was denied a spot in The Golden Contract light-heavyweight final by Serge Michel.

Germany-based Michel stopped Conroy in the fourth round after knocking him down three times, most sharply with a short right hand.

Michel qualifies for the final to fight Ricards Bolotniks, who beat Hosea Burton in their semi-final.

The week has only just begun… Tune in this Sunday for the return of @BoxingBuatsi 🔥 pic.twitter.com/yIcyuexHYl