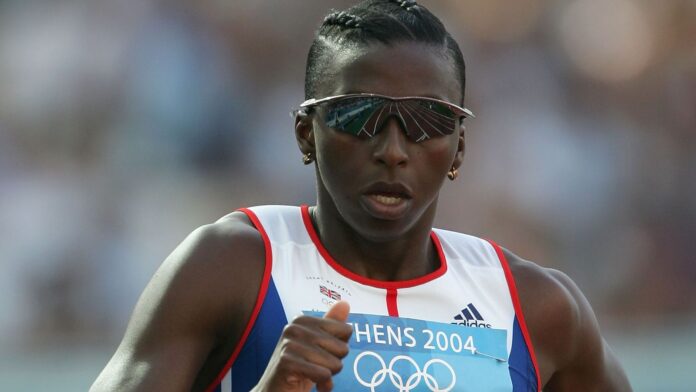 Fraser tells SSN about experience with breast cancer, reflects on 400m final at Sydney 2000 and inclusion role within UK Athletics

The former Team GB sprinter came fourth in the 400m at the 2000 Olympic Games in Sydney.

Her training partner, Cathy Freeman, who had the weight of the nation on her shoulders, won gold wearing that iconic green, white and yellow body suit.

Fraser, who is now Equality, Diversity & Engagement Lead at UK Athletics, was forced to retire from athletics in 2009.

At the time, everyone thought it was because of an Achilles injury. In fact, it was due to her diagnosis of breast cancer.

Fraser was diagnosed when she was 36-years-old and, at the time, she only told her coach and close family members.

As she started her treatment, she continued training and competing, but it soon became too much.

She told Sky Sports News: “As an athlete, you always think that these things would never happen to you.

“You remain fit, you eat well, you get enough rest. But it just goes to show that breast cancer doesn’t discriminate and it was a curveball that hit me from all directions.

“I wasn’t expecting that. There was no family history whatsoever, so when I was told that day, it was an absolute shock.

#Repost @breastcancernow • • • • • • ‘That nearly one million women across the UK were caught up in the backlog waiting for breast screening is cause for grave concern as we know that around 8,600 of these women could have been living with undetected breast cancer. Mammograms are a key tool in the early detection of breast cancer, which is critical to stopping women dying from the disease. ‘We understand that the breast screening programme was paused out of necessity due to the global COVID-19 pandemic, but we must now press play to ensure that all women can access breast screening, and we cannot afford for the programme to be paused again.’ Baroness Delyth Morgan, Chief Executive at Breast Cancer Now Coronavirus is the biggest crisis that breast cancer has faced in decades. At the start of this year, as the number of coronavirus cases began to grow, it became very clear, very quickly that the pandemic would have a huge impact on breast cancer. To help us understand this impact, we asked people with breast cancer to tell us how coronavirus had affected their diagnosis, treatment and care. Our report shares what we are hearing and seeing about the impact of coronavirus on breast cancer, including from breast cancer patients and healthcare professionals. Find out more via the link in our bio.

“But to be fair, when you’re an athlete, when you’re thrown things in your way, you just overcome it somehow. You have that mental toughness.”

Fraser is supporting breast cancer awareness month. She feels fortunate that she caught her cancer early.

Nonetheless, she decided to have a mastectomy and although she did not feel ready to talk about it at the time, she now wants to inspire others and encourage women to check themselves, as she did 12 years ago.

She said: “That time of year I was training so hard. I checked my breasts regularly anyway and found a very small lump.

“I thought it was probably because I was lifting heavy weights, training hard or a bit run down, but I kept an eye on it. I thought I better go and get it checked out and the rest is history really. I saw my GP and she said regardless, it needs to be removed.

“As a woman it’s a big deal if you’re having your breast removed, both or one and I consulted my family, I spoke to my coach.

“At the end of the day I thought this is just a small part of me, I am still me, I am still Donna and even if that gets removed anyone walking past me down the street will never know, unless I told them.”

Fraser on her inclusion role

As UK Athletics’ first Equality and Diversity Lead, Fraser believes it is important to have BAME representation at all levels of the sport, including on the board.

She said: “Diversity brings so much more than visibility. It’s to do with finances, it’s having diversity of thought around the table…It has to be reflective of our sport and athletics is extremely diverse.

“We have the Paralympics side, male and female. We are diverse and probably one of the few sports that can say that. So we have to be reflective of our sport at all levels.”

Fraser concedes there is still work to do and the organisation is not perfect, but insists there is an ongoing diversity programme.

Many athletes have expressed a desire to show their support of the Black Lives Matter movement at next year’s Olympics, something Fraser supports.

However, political protests are currently banned. At the British Championships last month, athletes were told they could take the knee or observe the movement in any way they wanted. But it was entirely up to the individual if they wanted to take part.

“We have black athletes running for us getting medals”, Fraser said. “We should be able to support them.”

‘Sydney 2000 was my career highlight’

We all remember Freeman winning gold in the 400m final of the Sydney Olympics in that body suit and she crossed the finish line looking drained, shocked and relieved as she was congratulated by her training partner Fraser, who came so close to a bronze medal.

The moment the two embraced each other was beamed around the world. Fraser may have just missed out on a medal, but it typified her generous nature. And despite coming so close, that summer was the pinnacle of her career too.

Believe it or not, the race was 20 years ago. In fact, Fraser messaged Freeman on the anniversary last week.

“Cathy Freeman is an amazing individual. She obviously trained in the UK that summer just to get away from the pressures that she was under leading into Sydney.

“Obviously it was the best thing she could have done and the best opportunity I had. We spoke about everything, apart from the Olympics that summer.

“We trained hard, we built up such a great friendship that would never be broken and then of course Sydney was the highlight of my career as well.”

Gemili, Nielsen lose funding after staying with US coach

‘Not my choice to be here’: Hamilton condemns Saudi Arabia’s ‘terrifying’...