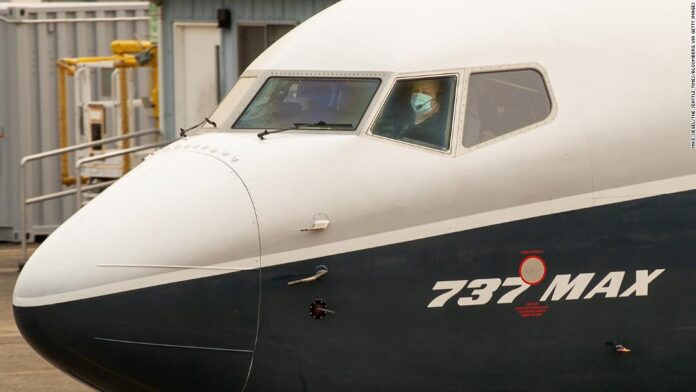 “I like what I saw on the flight,” said Dickson, a former airline pilot who flew earlier versions of the 737.
“That doesn’t mean I don’t have some debrief items going forward,” said Dickson after his two-hour flight from Seattle’s Boeing Field.
Dickson said he’d like to see tweaks “not so much in the procedures, but in the narrative that describes the procedures.”
Federal regulators are still evaluating Boeing’s proposed safety changes to the embattled design after a pair of fatal crashes abroad killed 346 people, grounding the plane worldwide in March 2019. Dickson stressed his unorthodox flight was not part of the official FAA recertification process — which Dickson said is in the home stretch.
The 18-month grounding has cost Boeing at least $18 billion. And it has missed a series of target dates for getting approval for the plane to again carry passengers. Before the Covid-19 pandemic it had been expecting approval for the plane by the middle of this year.
But the pandemic, and the resulting plunge in air travel worldwide, has led virtually all airlines to park a large percentage of their planes, reducing the need for Boeing (BA) to win the approval for the plane to fly sooner than later.

The daughter of Joseph Waithaka, who was killed in the Ethiopian Airlines Flight 302 crash, called the flight a “gimmick.”
“It’s nothing but a clown in a suit to reassure the public that everything is fine,” Zipporah Kuria said in an email shared by her attorney. “It’s clearly a PR stunt for the FAA and a free endorsement for Boeing.”
Dickson told reporters the flight was “not a publicity stunt.”
“It was important to me to understand the training and handling of the aircraft,” said Dickson, who prepared in a flight simulator and flew the actual airplane alongside a Boeing company pilot.
He also said concerns about the plane’s safety raised earlier this month by the FAA’s own safety engineers are under consideration by the officials certifying the plane. The safety engineers, in a document submitted to the FAA by their union, said additional work is needed before the jet should be cleared for passenger flights.
Dickson would not address the specific concerns, saying there is “a process for responding to and reviewing the comments,” but that he is proud of the agency’s work to raise questions and prevent “groupthink.”
A report prepared this month by investigators with the House Transportation Committee called into question the way the agency reviewed the plane for safety leading up to its initial certification in 2017.
“The problem is it was compliant but not safe, and people died,” committee Chairman Peter DeFazio, an Oregon Democrat, said.