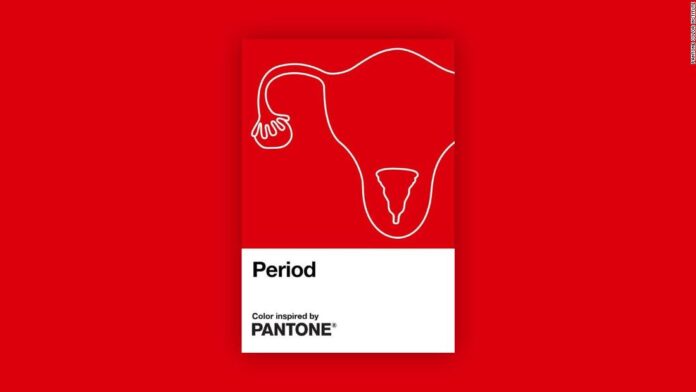 The new hue — an “energizing and dynamic red shade that encourages period positivity,” according to a press release — was launched as part of the Seen+Heard campaign, an initiative by Swedish feminine care brand, Intimina.

Vice president of the Pantone Color Institute, Laurie Pressman, described the color as a “confident red” that can help encourage positive conversations about menstruation.

“An active and adventurous red hue, courageous Period emboldens those who menstruate to feel proud of who they are — to own their period with self-assurance; to stand up and passionately celebrate the exciting and powerful life force they are born with; to urge everyone, regardless of gender, to feel comfortable to talk spontaneously and openly about this pure and natural bodily function,” Pressman said via email.

Menstruation remains a taboo topic in many parts of the world, impacting people’s health, education and socioeconomic status.

In India, for instance, women are sometimes forbidden from cooking or touching anyone during their period, as they are considered impure or dirty, which can contribute to a culture of silence and misinformation around hygienic practices. And in a mid-western region of Nepal, a 2019 study found that the practice of making girls sleep in menstruation huts is still prevalent, despite a nationwide ban.

The stigma also impacts women in the US, where period poverty — a lack of access to affordable menstrual hygiene products — affects one in five teens.

“Despite the fact that billions of people experience menstruation, it has historically been treated as something that shouldn’t be seen or talked about publicly,” said Intimina’s global brand manager, Danela Žagar, in a press statement.

“And if we look at popular culture, depictions of periods have ranged from wildly inaccurate and unsympathetic to being the subject of jokes and derision.”

Pantone’s latest initiative joins a number of recent efforts to boost the visibility of the so-called “period positivity” movement.

In 2019, a short documentary called “Period. End of Sentence,” directed by Rayka Zehtabchi, won an Academy Award. Later that year, the Unicode Consortium — a non-profit organization that develops and approves new emoji — introduced a “drop of blood” symbol following a campaign by the girls’ rights and children’s charity, Plan International.
While Pantone is best-known for its Color of the Year (which this year went to Classic Blue, a balm for uncertain times), it has also launched colors related to social and environmental issues.

In May, the organization released Pippi Longstocking Orange as part of Save the Children’s “Girls on the Move” initiative. Then, following the choice of Living Coral as 2019’s Color of the Year, Pantone partnered with the Ocean Agency and Adobe to release Glowing Blue, Glowing Yellow and Glowing Purple — shades based on the fluorescent colors produced by coral when threatened by warming oceans.

“Color is one of the most powerful modes of expression we can use to engage attention and get our voices heard,” Pressman said.