Home World The historic hurricane season isn’t over yet 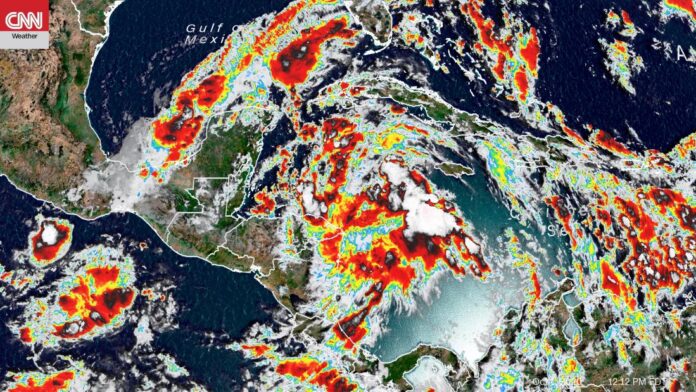 A system moving north toward the Yucatán Peninsula and west of Cuba is likely to become the 24th named storm of the season. The system is not very strong now, but the National Hurricane Center (NHC) has given it a 70% chance of developing into a named storm in the next five days.
If the system does get named it will become Tropical Storm Gamma, the third letter in the Greek alphabet. The NHC has resorted to using the Greek alphabet for only the second time in recorded history because the original list of 21 names has been used this season.
Atlantic hurricane season has already been very active, but it’s not over yet. Technically the season does not end until November 30, but some years storms have continued well after that.
Ultimately, the latest disturbance is not expected to become a major hurricane, but certainly it is worth watching especially if it moves into the Gulf of Mexico and strengthens. It will have some dry air and wind shear to contend with in the Gulf, but other systems have been able to overcome those same inhibitors as long as the Gulf waters remained very warm. The sea surface temperatures are above normal right now in the southern Gulf of Mexico and western Caribbean Sea.

October storms are not rare

During an average season, we see about two named storms in October and one in November. Which means that if this were a “normal” hurricane season, we would still likely have a few more storms possible through the end of November. But this year is not a “normal” season. It has been forecast for months to be very active.
“If you are looking at other notable October storms that have impacted the Gulf Coast in recent years, look no further than Hurricane Michael which formed in the same area of concern we are watching today,” says Michael Guy, CNN meteorologist.
Hurricane Michael formed southeast of the Yucatán Peninsula on October 1, 2018, strengthened into a named storm on October 7, and then made landfall as a Category 5 hurricane near Mexico Beach, Florida, just three days later.
So far this season, we have seen 23 named storms. The average for an entire season is 12.
Back in August, the National Oceanic and Atmospheric Administration (NOAA) updated the hurricane season forecast and called for 19 to 25 named storms. Prior to this, the agency had never forecast up to 25 storms in a season.
Every named storm so far this season, except for three (Arthur, Bertha, and Dolly), set their own personal record for earliest named storm in recorded history.