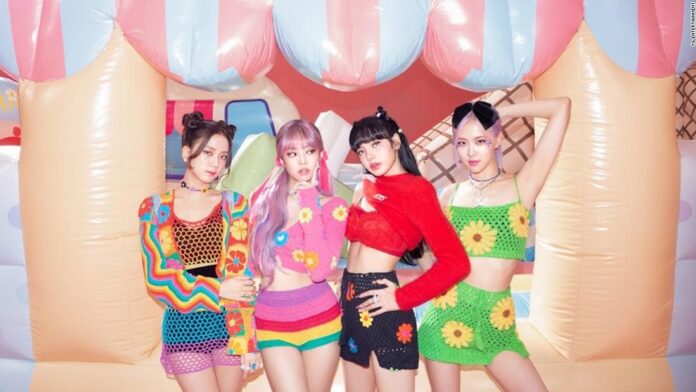 The women, who use their stage names Jennie, Jisoo, Rosé and Lisa, said that artists like Selena Gomez, Cardi B and Lady Gaga have had a profound impact on their music.
“We grew up listening to a wide variety of music. We all grew up in different areas, but I would say some of the amazing people we collaborated with we all grew up listening to and we are big fans of them,” Rosé said.
“[Cardi B] is our first rap feature,” Jennie said, while breaking out into cheers and clapping. “We are so excited to share this music with you guys.”
The catchy track “Ice Cream,” featuring Gomez, debuted in August and is included on the group’s newest collection of music, titled “The Album.”
Blackpink first rose to fame in 2016 with their hit single “Ddu-Du Ddu-Du.” Since then, they have had several crossover hits like “Square Up” and were featured on Lady Gaga’s track “Sour Candy” off her “Chromatica” album.
“It’s been a while and we feel like it’s about the right time for us to be coming out with [an album]. It contains a wide variety of music that we’ve tried to explore,” Rosé said. “We hope that our fans can see that and we have some very vulnerable songs and fun songs and some of our dream collaborations.”
The now international stars told CNN they make sure to stay humble and focused.
“We keep each other grounded,” Rosé said.
“We are all workaholics in our deep self and we love to work. I don’t think we get overwhelmed by the fame, at least no yet. We try to not let it go to our heads. We try to talk to each other, we don’t keep it to ourselves which helps a lot … we just look around and we have somebody just like me, thinking about the same stuff, telling me what I was thinking in my head,” she added.
And that mindset is what has propelled them to the top with what only appears to be a bright future ahead.