Home Culture ‘The Rock,’ LeBron and Scott Baio all have 1 thing in common 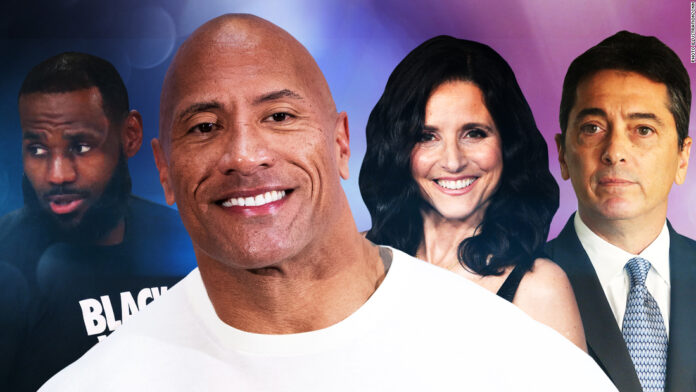 Before he was the 45th President, Donald Trump was best known as the real estate mogul who uttered “You’re fired!” on “The Apprentice.”
The 40th President of the United States, Ronald Reagan, was a film and television actor before entering public office.
And just as Trump and Reagan had the right to run, celebrities, like any American citizen, have the right to weigh in on who is running. Let’s take a look at a few:
Dwayne Johnson: “The Rock” did just that recently, endorsing former Vice President Joe Biden and US Sen. Kamala Harris of California in the upcoming presidential election.
“As a political independent & centrist, I’ve voted for both parties in the past,” Johnson tweeted along with a video of himself chatting with Biden and Harris. “In this critical presidential election, I’m endorsing @JoeBiden & @KamalaHarris. Progress takes courage, humanity, empathy, strength, KINDNESS & RESPECT. We must ALL VOTE.”
Johnson, a global star with a massive following who has in the past floated the idea of himself running for president, got some criticism for his endorsement. I doubt he’s too worried about it.
Julia Louis-Dreyfus: The fourth night of the recent Democratic National Convention was hosted by the former “Veep” star, who isn’t a politician but has played one on TV.
More from Pop Life Chronicles
She is also a vocal supporter of Biden, with whom she has shared a friendship for many years.
During an interview last week with CNN anchor Jake Tapper for CNN’s CITIZEN event, she talked about her involvement in a campaign designed to get people to volunteer as poll workers.
“If you do not have enough people working the polls, polls close down,” Louis-Dreyfus said. “And of course a lot of people who work the polls are older people. They may be less inclined to sign up to work given the Covid outbreak. Understandably so, the idea was to keep polls open for everybody and to do that, we need workers.”
It’s not just one side of the aisle that’s drawing celeb support.
Scott Baio: The actor is a vocal supporter of the President, appearing on the Trump 2020 site.
“I do it for my daughter, I do it for my country,” Baio said of his Trump endorsement. “There are certain things that I believe in.”
Some stars are putting the weight of their wallets behind their activism.
LeBron James: The basketball phenom and Hollywood producer has been working to get out the vote.
The NBA star’s More Than a Vote organization is working with Live Nation to convert empty concert venues into voting sites to make voting more accessible.
“We want to get to the communities. That’s what the call of action is all about when it comes to More Than a Vote,” James said during an appearance last month on the Vice program “Cari & Jemele: Stick to Sports.” “It’s getting to these communities and allowing them to know and letting them know that they matter.”
Celebrities like James have powerful platforms and, potentially, an ability to motivate people to participate in the US democratic process. But isn’t that kind of the point?
Democracy is not a sideline sport. We win when we all play.
So, let’s spend less time worrying about celebrities voicing their politics and more time educating ourselves to make informed decisions at the polls.
Because if you say you love this country, you have to love democracy, right?

Three things to watch:
‘Saturday Night Live’
Looks like I’m sticking with this week’s political theme.
“Saturday Night Live” returns for its 46th season this weekend, and buckle up for the Trump versus Biden fun the cast is sure to have.
No one spoofs politics like “SNL,” even when real life sometimes seems determined to outdo those skits.
We’ve come to love Alec Baldwin as Trump. Jim Carrey steps into the role of Biden this season.
Plus, the show is back home with a live audience in 30 Rockefeller Plaza in New York City since going virtual in March due to the pandemic.
Baldwin and Carrey in front of a live studio audience at 30 Rock? That’s some “bigly” energy right there!
Former “SNL” cast member Chris Rock is set to host, with rapper Megan Thee Stallion performing as the musical guest.
‘Song Exploder’
I love, love, love music so this new Netflix documentary series is right up my alley.
Based on the acclaimed podcast of the same name, “Song Exploder” features host Hrishikesh Hirway and Oscar-winning filmmaker Morgan Neville with some of the world’s greatest musicians. The duo get a behind-the-scenes look into how an artist has brought one of her songs to life.
“The series weaves together in-depth interviews, archival footage, and raw recordings as each artist breaks down their song, layer by layer, sharing intimate insight into the personal inspiration behind the music and lyrics,” according to Netflix.
This season’s artists include Alicia Keys, Lin-Manuel Miranda and Ty Dolla $ign.
“Song Exploder” starts streaming on Friday.
‘Savage X Fenty Show Vol. 2’
We are still waiting on new music, Rihanna!
But in the interim, we will have to make do with Amazon Prime pulling back the curtain on her wildly successful lingerie brand.
Amazon is billing it as “a high energy and visually stunning experience where you can watch and shop her latest lingerie line.”
“Hear from Rihanna, those closest to her, and go behind-the-scenes of the Savage X Fenty brand as you sit front row to see top artists and models: Travis Scott, Rosalia, Bad Bunny, Lizzo, Cara Delevingne, Miguel, Bella Hadid, Normani, Willow Smith and many more,” according to a release.
Can you really go wrong with Rihanna and lingerie? I think not.
You can catch it starting Friday.
Two things to listen to:
If you don’t know who Blackpink is I’m betting you don’t have a teenager living in your house.
The K-pop girl group — which consists of members Jennie, Lisa, Rosé and Jisoo — has been around for a few years. Blackpink became the first of its genre to perform at Coachella in 2019.
The South Korean group most recently has worked with the likes of Lady Gaga and Selena Gomez.
Fans have been psyched for the debut studio project, “Blackpink: The Album.”
There has been lots of mystery around it, but just know that it’s a big deal and will be trending when it drops on Friday.
This is not a drill: Dolly Parton is celebrating the most wonderful time of the year.
“A Holly Dolly Christmas” is Parton’s first Christmas album in 30 years and will feature collaborations with Willie Nelson, Michael Bublé, Jimmy Fallon, Billy Ray Cyrus and his daughter, Parton’s goddaughter, Miley Cyrus.
The country music superstar knew just what we needed this year.
“I figured since everybody probably wouldn’t get to celebrate Christmas as usual this year, I wanted to be creative instead of sitting around at the house this summer,” she said in a statement, as reported by Consequence of Sound.
“So I put on my mask, gloves and practiced social distancing, as well as all of the wonderful musicians and singers, and we proceeded to put together what I think is some of the best work that I’ve ever done.”
Gotta love Dolly.
One thing to talk about:
The community of voice actors is a smaller slice of Hollywood that people don’t often discuss, but it appears to be making big strides in diversity.
Alex Désert debuted this week on the new season of “The Simpsons,” taking over the role of Carl Carlson from fellow actor Hank Azaria.
This is significant because the character is Black, Désert is Black and Azaria is not.
Azaria has been at the center of conversation about actors who are not of color portraying characters who are.
The 2017 documentary “The Problem with Apu” examined the actor’s portrayal of Apu Nahasapeemapetilon, a character who speaks with a heavy accent on “The Simpsons.”
Azaria the following year said he would be willing to “step aside” from playing the role, and in January of this year, he announced that he would indeed stop voicing the character.
Then the death of George Floyd happened, causing many to reexamine race relations in this country.
Both Jenny Slate and Kristen Bell said that they would cease their respective roles voicing multiracial characters on animated series.
“The Simpsons” announced in June that it would no longer have White actors voicing non-White characters.
All of these moves have sparked and encouraged conversations about leaning into finding qualified actors of color for projects with diverse characters.
Representation matters, even when you can’t see the face behind the voice.

Let’s end this how we started, shall we?
When it comes to voting, no one should be denied the right or the right to advocate for it.
I recently shared a tweet about a group of Atlanta exotic dancers who filmed a public service campaign that urged folks to “Get Your Booty to the Poll.” (It sparked quite a reaction.)
I interviewed the PSA’s director, Angela Barnes, and one of the dancers, Coy Malone.
The combination of an infectious beat (composed by Steve G. Lover and produced by Chemist), beautiful and skilled women literally on the pole and a message about the importance of down ballot voting proved to be irresistible to some.
But to others, it offered an opportunity to slam the provocative ad as both immoral and pandering to Black male voters.
I will echo what I said at the top of the newsletter — these women are citizens who have every right to speak out on the importance of showing up for the polls.
And if social media is any indication, it’s a pretty effective ad.
The group won praise for stressing the importance of voting for everyone, including district attorneys, school board members and yes, exotic dancers and their fans.
As Barnes told me, “all Black lives matter, not just ‘respectable’ Black lives.”
Pop back here next Thursday for all the latest entertainment happenings that matter.