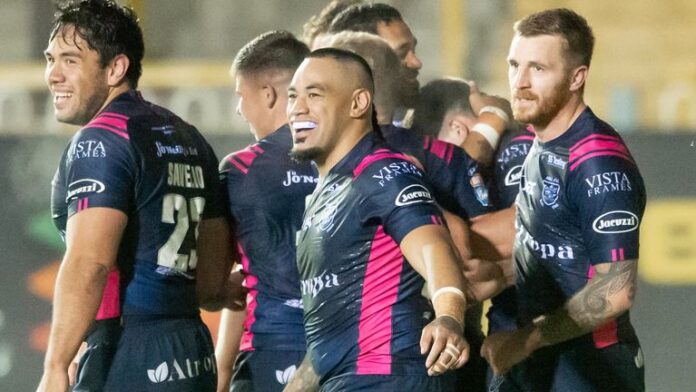 Cameron Scott’s opener and Jordan Johnstone’s first try for the club, plus two conversions and a penalty from Marc Sneyd had Hull leading 14-12 after a frantic first 40 minutes, with Mike McMeeken and Greg Eden’s converted scores keeping the Tigers in touching distance.

The match swung one way then the other after the break and Michael Shenton looked to have won it for the hosts with a converted try late on. However, Hull got the ball back straight from the restart and Connor finished off from ex-Tigers half-back Sneyd’s kick to secure the win.

It was a memorable night too for 18-year-old Ben McNamara, son of Catalans Dragons head coach and former Hull player Steve, who capped his debut from the interchange bench with a try after being a late inclusion in Andy Last’s side.

By contrast, it was a disappointing first game at the Mend-a-Hose Jungle for six months for Castleford, who can no longer realistically claim a top-four finish.

Hull, led by England prop Scott Taylor on his first appearance for six months, made the best possible start, with Connor gathering Sneyd’s kick out wide for winger Scott to score the opening try after just four minutes.

Sneyd converted from the touchline to make it 6-0 but Castleford struck back with two tries in seven minutes to take the lead as second rower McMeeken finished off a break by Gareth O’Brien and James Clare linked up with his three-quarters to get winger Eden speeding over for the Tigers’ second try.

Castleford went on to dominate the rest of the half but lacked composure, with Junior Moors having a try disallowed for a knock-on and centre Cheyse Blair dropping the ball with the line at his mercy.

Having somehow kept their line intact, Hull drew level in bizarre circumstances 10 minutes before half-time. Referee Tom Grant allowed play to continue as a melee broke out in back play and Hull hooker Johnstone, sensing an opportunity to score his first try for the club after watching Connor break free, peeled away and raced upfield to provide the support.

Castleford coach Daryl Powell, who is already in hot water with the RFL for publicly criticising referees, reacted furiously to the awarding of the try and his mood worsened in the last five minutes as the Black and Whites regained the lead.

Nathan Massey was punished for a high tackle on Johnstone, which enabled Sneyd to kick a penalty, and fellow interchange man Matt Cook was then shown a yellow card for a late shot on Joe Cator.

Cumbrian Johnstone was denied a second try when he was prevented from grounding the ball over the line following the restart, but there was no stopping prop Tevita Satae when he made a strong charge for the line and Sneyd converted the try for a 20-12 advantage.

Back to 13 men with Cook emerging from the sin bin, Castleford began to put their game together once more and Jack Sanderson, on his home debut, had a try disallowed for a double movement before prop Grant Millington dummied his way over on 56 minutes to cut the gap to four points.

The highlight came when Connor juggled with the pass from McNamara before regaining possession and raced into space to send the youngster over for his try.

Sneyd kicked his fifth conversion but missed a 50-metre penalty attempt, and the game was back in the balance when McMeeken forced his way over for his second try and skipper Shenton won the race to McShane’s grubber kick.

O’Brien’s fourth goal nudged his side back in front but Hull regained possession from the re-start and Connor raced onto Sneyd’s kick to score the match clincher.