Home Sport How to referee a boxing match 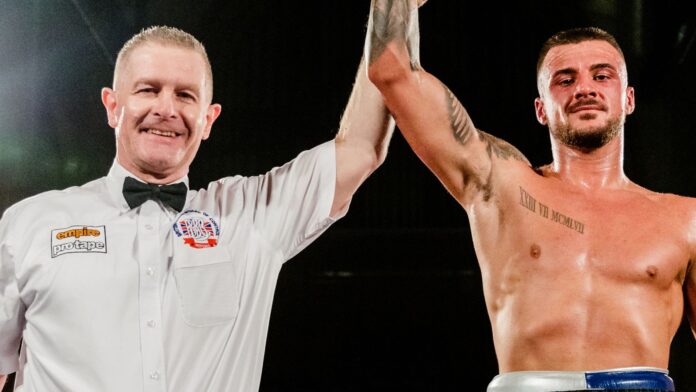 Do you know what the boxing rulebook says should happen if a fighter is punched completely out of the ring?

Have a think. We’ll wait.

Surely this is a rule that has never had to be enforced?

“It happened once,” Cook recalls. “The guy went completely out of the ring. I remembered the rule, to count to 20. If you don’t know the rule, the guy would be left without an extra 10 seconds to get back in the ring.”

Did the boxer heroically climb back into the ring, beating the 20-count, to launch an astonishing comeback?

“No, funnily enough he stayed in the front row chatting to somebody and didn’t bother getting back in the ring,” Cook says.

The 61 year old from Norfolk is officially the Guinness World Record holder for ‘Most Professional Boxing Matches Refereed’.

“I made myself available for everything,” he says of his record attempt.

He refereed in Wembley Stadium and at the end of the Grand Pier in Weston-Super-Mare, wherever there was a fight.

The idea came from a conversation outside York Hall, the iconic London boxing venue, with journeyman boxer Kevin McCauley, who was considering a record attempt of his own. McCauley has had 235 fights so far.

The long motorway drives and the weekly calls to venture around the country were made worthwhile for Cook every Saturday night when his authority was needed to keep boxers in check.

This is a rare interview with any boxing referee, past or present, so it is suggested to Cook his profession must make him an unflinching disciplinarian.

He says: “I have only disqualified three people in over 1,000 fights – two on the same night! One of them was Kevin McCauley who gave me the idea for my world record!

“He popped the head in on someone which was a bit naughty. It wasn’t acceptable so I disqualified him.

“In my next fight on the same night, someone went ballistic so I threw him out.

“I give them every chance to behave, there are times when I give them a telling-off which usually works. But, in the heat of the moment, sometimes someone loses it!”

Cook insists he was inspired by watching a fight where a referee completely lost control. He vowed he would never allow that to happen to him (and insists it never has).

“The key point is to have a presence,” he says. “If someone is doing something that’s not right? Sometimes I steam into a big heavyweight and give him a telling-off.”

A boxing referee is most notably forced into the unwanted spotlight when it is perceived he has stopped a fight too quickly or too late.

It is a crucial skill they must possess – to know the correct time to save a boxer from further punishment. Too soon and you rob him of his dreams. Too late?

“I was always told the referee sees more,” Cook says.

“That is true. I see more of the quality of punches and how they land than a guy sat at ringside or further away.

“I remember one guy was winning the fight but was caught and his eye swelled shut. He went out cold the moment I stopped it. Two seconds later he was wide awake.

“People didn’t see what I saw. They said: ‘Why did you stop the fight?’

“At the time I saw something that nobody else saw. If the guy was hit in that moment, he might have been badly hurt.

“Stopping a fight? Generally I have done OK. With experience you can gauge when it’s the right time.

“If someone is on the deck you look into their eyes, get them to walk forwards and make sure they respond to your commands. If they then get caught, you’ve done everything that you can do.

“It is more difficult to score a fight. I’ve scored 662 out of 665! It’s difficult if it’s nip and tuck. Fifty-thousand people can watch a fight and half see it one way, half see it the other way.”

Cook is available for more assignments now boxing has returned.

He remains a student of his secretive craft.

“I know the rules religiously. I read them before every show because they change and are adjusted,” he says.

His presence and authority may be needed in a ring for a major fight soon.

“I was told: ‘You are sometimes right, sometimes wrong, but never be in doubt’.”

The Time Is Now ⏳

Is @chantellecam the next big thing in women’s boxing? 👇