Home Sport ‘Miscarriage is a subject nobody talks about’ 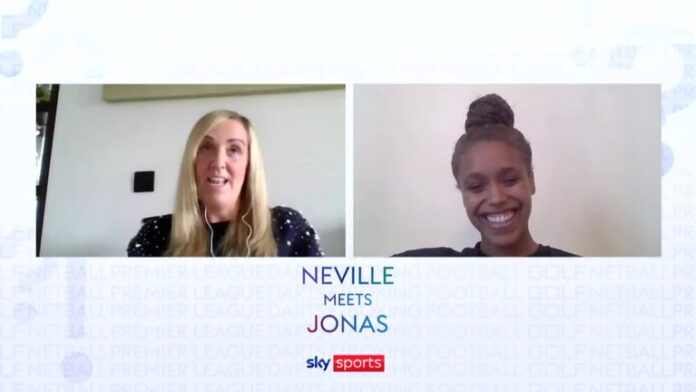 Watch the full conversation, on Sky Sports Mix on Friday

In an interview for National Inclusion Week, Tracey Neville and Natasha Jonas speak about the perspective motherhood gives you on elite sport and how miscarriage is a taboo subject in society.

As part of the week’s theme of bringing people and organisations together to connect with each other, Neville caught up with the professional boxer and fellow mother.

After falling pregnant in 2015, Jonas stepped away from an incredibly successful amateur boxing career. She was the first British female boxer in history to qualify for an Olympic Games and after having daughter Mela, had the drive and determination to return as a professional two years later.

“She just gives me a different motivational drive. I want her to see me having a goal and a target and achieving it, no matter what it is,” Jonas said to Neville.

“I’m talking as an athlete, but it doesn’t matter what you are or what you’re doing. It might be another skill or ability you have.

“You want your kids to have a goal, work hard, believe in themselves and try their best. You have to lead by example, and I want her to see that.”

Jonas also added that Mela provides a level of perspective to her sporting career, something that many athletes have said happens after becoming a parent.

She shared that a hug from her little girl helped her remember a loss to Viviane Obenauf was not the end of the world, and also she always leans on her family for support.

“We are a close family and I think that it’s important. People only see the eight or the 20 minutes that you’re in the ring for, they don’t see the 10 or 12 weeks it’s taken to get there, or the four years of ups and downs for the Olympics.

Me and my baby, at her 1st ever match, supporting her footballing hero, who also happens to be her aunty. So proud of her and the team who gave it their all, not the result we wanted, but u have taught a lil girl to dream big. She now wants to come all the games, play herself and has found her 1st sporting love. 🦁🏴󠁧󠁢󠁥󠁮󠁧󠁿Lionesses, u did that, forever grateful, thank you! 🌍🏆⚽️

“When I decided to come back into boxing on the professional side, they [my family] were the first people I consulted because they’re the ones who knew the behind the scenes. No one else saw that I cried for two days after I lost in the Olympics, but they did.

“So, when I’d had this idea to go back, I asked my cousin, sister and my mum about it. The highs in boxing are so high and you’re constantly chasing that high, that’s what keeps you in the game. But, the lows are so low.”

Neville had her first child Nev just before the UK-wide lockdown in March and she believes that aspects of her professional life, have helped her as a mother.

“There’s one person [your child] trusting you to do the best possible job for them. I think that is a comparable scenario to when I was head coach of England Netball.

“You have a huge number of players and staff who are trusting that the decisions that you’re making, are going to help them achieve something they live and breathe for, which is a medal. I think that’s very comparable to motherhood.”

At the height of Neville’s professional career as England Netball’s head coach, she led the Roses to a gold medal at the 2018 Commonwealth Games.

It was their first major gold and should have been one of the happiest times of her life. Yet, the day after she experienced a devastating loss having suffered a miscarriage while in Australia.

“I was actually pregnant before Mela and I miscarried,” Jonas told Neville. “Why did you think it was so important to share your story?”

“I never actually shared that piece of information [about my miscarriage] until I’d left my role,” Neville said. “Because sympathy is something that females and athletes don’t want.

“That’s something that you don’t want. If you lose or fail at something, the worst-possible scenario that you could put me in, is to give me complete sympathy and feel sorry for me. That’s not where I want to be.

“With of all of that secrecy and trying to keep it in yourself, it actually sometimes becomes harder. When I did share it with one of my friends, I found out that she’d had a succession of miscarriages and not told anyone as well.”

Jonas agreed. “It’s a subject that nobody talks about, isn’t it,” she said.

“Yes and in a way, it’s actually wrong. It’s actually wrong,” Neville added. “I think at school, you only have the talk about pregnancy being successful. I never got taught at school about the many problems and obstacles that people go through to actually have a baby.

“The second thing that I found very difficult, and I can say this to you Natasha now, I’m 43-years-old and at the time I was 42 and they gave me a five to 12 per cent success of having a child.

“If you were going into a fight tomorrow against your opposition and they gave you those winning odds, where does that put you in the framework? That’s not how you can go into a fight, you’d probably get yourself hurt. Nobody ever wants a five to 12 per cent chance of succeeding.

“Those are the stats that are out there, but how many 42 or 43-year-olds have actually had children as well?

“The [positive] stories are very rarely shared. A lot of it is just down to the negativity around older mums, miscarriages and it being a taboo subject.”

Jonas became a mother in her 30s and believes that waiting until she was a little older, was ultimately the right thing for her to do.

“I’ll never regret waiting because I’m already a person. I know who I am and I’m comfortable with that. So, I can appreciate who I am and let her share in that.

“I think that as a younger person, I was a lot more selfish to be honest. I don’t think that I would have been the mum that I am now.”