Home Culture David Attenborough offers his ‘witness statement,’ and a warning, in ‘A Life... 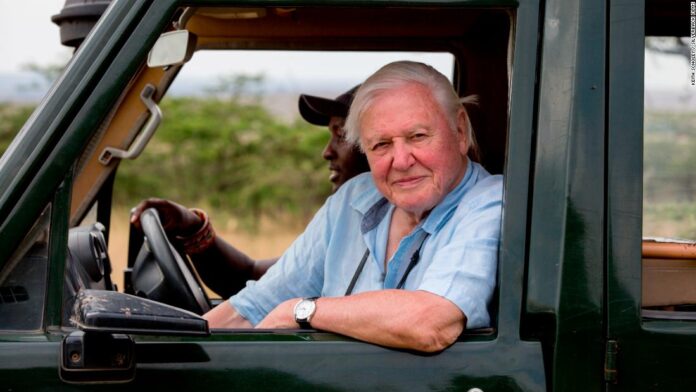 Attenborough doesn’t overstay his welcome, in an 80-plus-minute Netflix special that essentially races through his career — including footage of the naturalist as a young man in the mid-1950s — to get to his prescription for addressing the impending climate-change disaster.
Driving home the point, Attenborough begins in Chernobyl — a place, he notes, that’s no longer habitable, which could be the fate of increasingly large sections of the globe barring strategic intervention.
“The natural world is failing,” he says gravelly, in the soothing tones that have powered countless nature documentaries. “The evidence is all around. It’s happening in my lifetime. I’ve seen it with my own eyes.”
The documentary further illustrates the damage already done by flashing the population, carbon levels and percentage of wilderness across the decades, charting the rise of the first two columns and the sobering decline of the third, using Attenborough’s filmography as a convenient guide.
Frankly, the production might actually be more compelling if it took a bit more time to celebrate Attenborough’s career, which, he notes, began as the world became smaller thanks to plane travel, and proceeded in a remarkable life that has included visiting parts of the world most people will never see.
Small wonder he recently dazzled the Royal Family and amassed a huge Instagram following practically overnight.
There’s not much time for extended detours down memory lane, alas, because the situation is so dire. Attenborough cites the unsustainable trajectory of our current path, the alarming fact that “our planet is losing its ice” and the need to “work with nature rather than against it.”
There’s always the risk of sounding preachy in this sort of exercise in a way that scares off those who can be reached, or perhaps worse, being unduly optimistic. Attenborough finds a middle ground, devoting the last 30 minutes to potential solutions as he articulates “my vision for the future. … and how, if we act now, we can yet put it right.”
Nature documentaries have become one of the identifiable bounties of the modern streaming age, with improved technology wedding demand for content across the globe, on US channels and services like Discovery, National Geographic and BBC America, as well as Netflix, Disney+ and Apple TV+.
The abundance of such fare, however, now frequently comes with a sobering warning due to the threat that has become increasingly visible in everyday lives.
With the pronoun in its title, “A Life on Our Planet indicates that we’re all in this together. While there are plenty of voices chiming in on that score, there might not be one with more credibility than Sir David in sounding those alarms.
“David Attenborough: A Life on Our Planet” premieres Oct. 4 on Netflix.