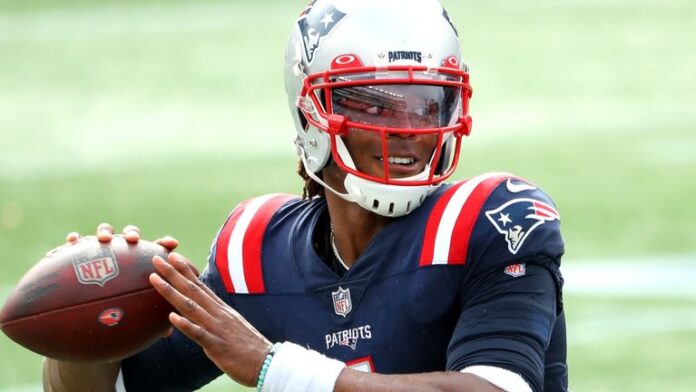 Newton is set to face Mahomes for the first time in his career on Sunday – the 2015 league MVP taking on the 2018 MVP and reigning Super Bowl MVP – and he’s a fan.

“Not only that, he has a lot of merit to what he does. It’s not like he’s back there like an arcade game. Sometimes it looks like it, but he knows exactly what he’s doing and he’s manipulating the defense.

“That’s the same thing that the Dan Marinos used to do, obviously the Tom Bradys, the Aaron Rodgers. Those guys really have so much command of the offense that you dictate to the defense.

“That’s what he’s doing. He’s playing the game at a high level.”

And the respect is mutual between the two quarterbacks, with Mahomes speaking of his admiration for Newton when watching football from a young age.

“I wish I could do some of the things he does, as far as how physical he is, and the way he’s able to make plays happen,” Mahomes said ahead of Sunday’s match (live on Sky Sports NFL, 9.25pm).

“He’s a great football player, someone I watched when he was at Auburn. “He’s in a great spot now and he’s playing really good football.”

The Patriots are currently 2-1 on the season under Newton, while Mahomes’ Chiefs are 3-0, unbeaten in 12 games dating back to November 10 of last year, but Newton has stressed they need to just focus on what they can control and not get too caught up on who they’re facing.

“We just got to play Patriot football, simple,” Newton said. “If we do that, control the line of scrimmage, stick to the key to win, we really can’t just focus on something we cannot control.

“We know we have to play complementary football throughout this game, and I believe we’re stacking practices on top of practices and that gives us enough confidence going into the game on Sunday.”

The 2020 season has seen some exceptional play at quarterback already through the first three weeks of the season, but who is playing the best?

It’s time for the Atlanta Falcons’ leaders to stand up as the team looks to avoid adding to its record of second-half collapses, says former NFL coach Rob Ryan.

On Inside The Huddle, Ryan spoke out on the 25-point and 16-point leads the Falcons have blown in consecutive weeks to the Cowboys and Chicago Bears, respectively. Atlanta also gave up a 25-point lead against the New England Patriots at Super Bowl LI.

“In Atlanta’s case, change the game,” Coach Ryan said. “Don’t just keep playing what you’re doing, it’s not working. And they just come back and steamroll you in the end. Trust me I learned the hard way.

“You can’t tell me you can’t run the football at the end of the game? You need to run the football to win games. If you want to see that, don’t go to (Kyle) Shanahan, go watch (Bill) Belichick, they do it every week.

“They [the New England Patriots] burn the clock, they protect the lead, that’s complementary football. Some teams aren’t used to it. Atlanta obviously doesn’t know how to do it.

“Their problem isn’t just defense, it’s a team thing. It’s the head coach, it’s the offense, defense and special teams, you all have your hands in it.”