Home Sport ‘I can’t understand the criticism of Dak Prescott’ 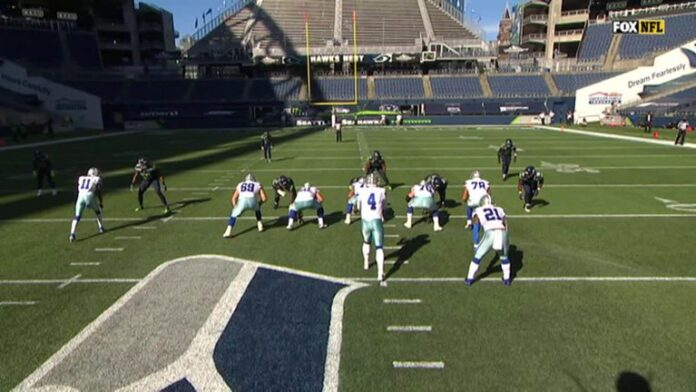 Watch Prescott and the Cowboys in action against the Browns as part of Sunday’s NFL triple-header, live on Sky Sports NFL from 5pm

Jeff Reinebold says he “cannot understand the criticism” of Dallas Cowboys quarterback Dak Prescott, in a week where owner Jerry Jones has been accused of throwing shade at his QB.

The Cowboys decided to ‘franchise tag’ Prescott for the season, over offering him a new contract, with the suggestion being Jones is not yet convinced he is the team’s quarterback for the future.

Prescott has impressed during the first three weeks of the season, throwing for 396 yards per game, with five passing touchdowns and three rushing, but the team are only 1-2 on the season, Prescott throwing a late interception in last week’s loss to the Seattle Seahawks.

Jones said on his radio show this week, when comparing Prescott to other mobile quarterbacks: “[Patrick Mahomes], I think is at the highest level right now because of his, frankly, natural ability to make plays, his mobility.

“This guy is very quick and elusive and can get in and out of situations with his feet and buy time. The quarterback we played Sunday (Russell Wilson) is of that kind of nature. He has great ability to get in and out and then make the play, that play Dak made at the end of the game that got intercepted.

“Well the result of Dak’s ability that let him get that ball off was really great and outstanding. Well, these guys do that, have that ability a lot.

“They are very quick-footed and they have the unique ability to possibly take their eyes away from the field for a minute and then immediately focus back and see, (Tony) Romo had that.”

Speaking on Inside The Huddle, which you can listen to as a podcast in the player above, Reinebold said while he does not believe Jones’ comments were overly critical, they were unhelpful.

“I don’t know if it was intentionally throwing shade at him [Prescott], Reinebold said. “I just cannot understand where all of the criticism of Dak Prescott comes from.

“So many times when you watch the Cowboys play, he’s the reason that they’re in football games – whether it’s his ability to throw the ball or extend plays.

“He’s a great quarterback. And this is why it’s so important to keep Jerry out of the media, because he’s going to do this to you four or five times a year. On his radio show in Dallas, he’s going to say something.

“This is Dallas, ‘America’s Team’. It’s just the nature of the Cowboys that everything positive and negative is going to get blown out of proportion and amplified 100 per cent.

“Plus, you put Dak in his contract year and it’s almost like they’re keeping score – here’s a positive, here’s a negative.

“He is going to get paid a lot of money, whether it’s in Dallas or somewhere else. I personally think it’s going to be in Dallas.”

Rob Ryan, who was defensive coordinator for the Cowboys in 2011 and 2012 under Jones, stuck up for his former boss, but also hailed Prescott as a “superstar”.

“He [Jones] was trying to make a couple of good points about the mobility of Mahomes, Wilson and Prescott; I don’t know if he was trying to cast shade on Prescott as much as he way throwing a bone to Tony [Romo],” Ryan added.

“No-one is more passionate than Jerry – you wish all the owners in the NFL were as passionate as he is. Believe me, I worked for him, the great Al Davis and Robert Kraft, and I loved this guy’s passion.

“Right or wrong, you know where he stands, you know what he believes – he’s an open book.

“In Dallas, everything is overblown. If you win a game, you’re going to win the Super Bowl. If you lose, everyone is getting fired. That’s just how it is, every single week.

“Dak Prescott is a superstar, everybody is starting to realise it. He’s going to be paid; there’s no way they’re going to lose him.”

‘Cowboys set up to go on a run’

“I think the Cowboys are the best team in that division [NFC East],” he said. “I don’t care that they’re 1-2, that means nothing to me.

“The Rams and the Seahawks [who they lost to] are good. The Cowboys could get another crack at both of those teams in the playoffs – they’re that calibre of teams.

“And the Falcons game they won, there were a lot of good things about it. Yes, they messed that game up early – three turnovers to start the game – but there’s things to build off.

“They’ve got a chance now. They’ve got the Browns this week – that will be a pretty good test – they’re two talented teams – but then the Giants, the Cardinals, Washington and the Eagles.

“Their schedule sets up for them to go on a run here. We’ll see where that goes.”

Watch the Cleveland Browns at the Dallas Cowboys as part of Sunday’s NFL triple-header, live on Sky Sports NFL from 6pm.

It is time for the Atlanta Falcons’ leaders to stand up as the team looks to avoid adding to its record of second-half collapses, says former NFL coach Rob Ryan.

Also speaking on Inside The Huddle, Ryan spoke out on the 25-point and 16-point leads the Falcons have blown in consecutive weeks to the Cowboys and Chicago Bears, respectively. Atlanta also gave up a 25-point lead against the New England Patriots at Super Bowl LI.

“In Atlanta’s case, change the game,” Coach Ryan said. “Don’t just keep playing what you’re doing, it’s not working. And they just come back and steamroll you in the end. Trust me I learned the hard way.

“Eli Manning got me once, in four minutes he scored two touchdowns and it was the first time in Dallas they had blown a 13-point lead and I was at the wrong end of it.

“Their problem isn’t just defense, it’s a team thing. It’s the head coach, it’s the offense, defense and special teams, you all have your hands in it.

“Then, you see at crucial times of the game leaders step up, they shouldn’t have an apple in his throat. You see that with [quarterback] Matt Ryan. Step up, man. Win the game.

“Great leaders step up. Anytime adversity hits watch the sideline, you’ll see the leadership. Russell Wilson has it, Dak Prescott has it, those guys are leaders, people follow them naturally.”

The 2020 season has seen some exceptional play at quarterback already through the first three weeks of the season, but who is playing the best?