Home Culture Who Did Trump Infect? Tracing His Contacts Is a Big Task 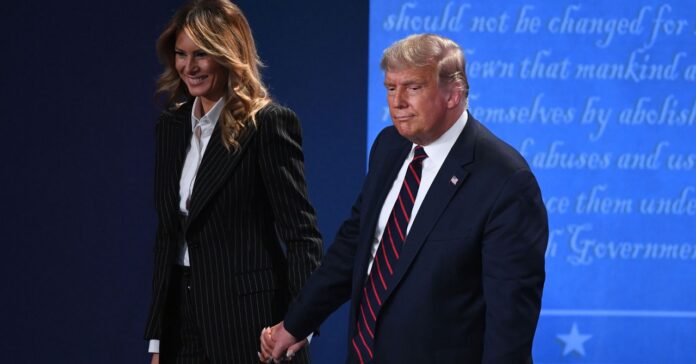 President Trump is isolating himself in the White House, having tested positive for the coronavirus last night. He and the first lady, Melania Trump, are experiencing “mild symptoms,” according to Mark Meadows, the White House chief of staff.

The president’s diagnosis will spark a mammoth contact-tracing effort, to identify everyone who came close to the president and his entourage in recent days. The number may run to hundreds of people.

Contact tracing is a vital tool for public health officials tackling the spread of the coronavirus, which may pass between people before they show symptoms. When someone tests positive, contact tracers try to find people who came into close contact with them, with a goal of isolating those people to slow the spread of the virus.

Emily Gurley, an epidemiologist at Johns Hopkins School of Public Health, says the first step is to work out when Trump likely became infectious. “We don’t really know, but from media reports it sounds like he had some symptoms on Thursday, which, if true, would put the beginning of his infectious period at about Tuesday,” she says.

In one way, Gurley says, tracing everyone who may have been exposed to the virus by Trump should be straightforward. “Contact tracing for the president of the United States is probably as good as it gets!” Gurley says via email. “His staff likely keeps detailed notes of meetings and his whereabouts. And how many people would have had contact with the president of the United States in the past few days and not remember it?”

But Cameron Wolfe, an infectious disease physician and an associate professor at Duke University, says that even if the Secret Service has good records of everyone who met with the president, the situation will be complicated by more casual interactions—for example during the president’s announcement of his selection of Amy Coney Barrett as his Supreme Court nominee in the Rose Garden. Two people at that event, Utah senator Mike Lee and University of Notre Dame president John Jenkins, have also tested positive. Two journalists, including one present at the Barrett announcement, and another White House staffer have also reportedly tested positive.

Wolfe adds that the president’s positive test shows that the White House’s effort to keep him safe through regular testing was flawed. “It works in the NBA because they have an absolute bubble,” Wolfe says. “Within a White House structure, especially during a federal election, they will have had people coming in and out of the bubble all the time.”

That list may turn out to be huge. With the election just a month away, the president’s schedule has been packed over the past week, with rallies in Florida and Pennsylvania, fundraising events in Georgia, Washington, DC, New Jersey, and Minnesota, and a debate with Joe Biden, the Democratic nominee, in Cleveland on Tuesday. Biden said on Friday he has tested negative for the virus.

With such a busy schedule, apparently including crowded meetings indoors and without masks, the risk of Trump or a member of his entourage being a super-spreader—someone who infects a large number of people—is increased. This is more likely if an infected person has had the virus long enough to build up a large viral load. Trump generally disdained wearing a mask, and many of his supporters followed his lead.

Besides searching for those whom the president may have exposed, it will be crucial, says William Hanage, an associate professor of epidemiology at Harvard, to determine how Trump was infected. The fact that the president and first lady tested positive on the same day suggests that the person who gave it to them may have been a super-spreader, Hanage says.

The Centers for Disease Control and Prevention recommends identifying anyone who spent more than 15 minutes within 6 feet of an infected person from two days before symptoms or a positive test. It recommends that these contacts be tested and self-isolate for 14 days, even if initial test results come back negative.