Home Sport HRR – Belgian Crews Lead the Alpine Challenge After Day One in... 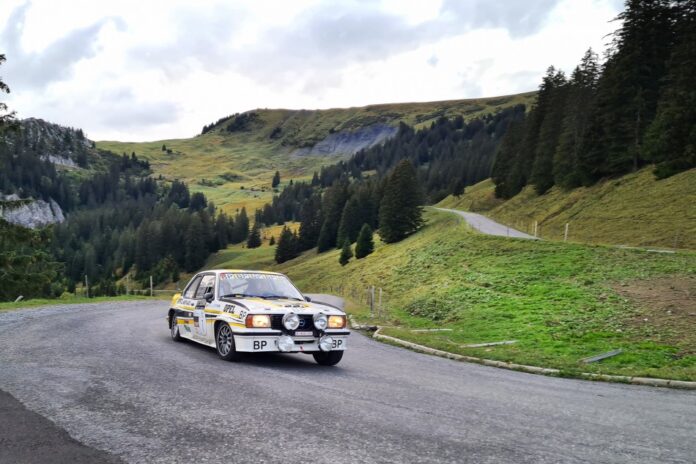 The first day of the final of the 2020 FIA Trophy for Historic Regularity Rallies, the Alpine Challenge, saw the no7 1979 Open Ascona 2000 of Michel Decremer and Patrick Lienne finish the first five regularity stages with a total penalty of 31.1, with the no3 1965 Morris Mini Cooper S of compatriots Jean-Jacques Martens and Aswin Pyck in second place with 39.9.

The day started dry in Villars-sur-Ollon with the competitors heading to Montreux for lunch at the Casino Barrière.  The afternoon began with the first of five regularity stages where the crews would have to travel the distance at an average speed on public roads.  Penalties would be incurred for being early or late at the time control, it is all about being precise and disciplined.

On the opening stage the no2 Ford Escort RS 2000 of Célimène Lachenal and Pierre-Yves Belotti incurred the least penalties with 13.0, 0.3 better than Maciej Trzebiatowski and Robert Skierski in the no4 1972 Lancia Fulvia Coupe.

The next two stages were led by the no7 Opel Ascona, with the Belgian crew second on stage 4 with 3.6, with the no9 1983 Audi 80 Quattro of Maurizio Vellano and Giovanni Molina in front with a penalty of 3.3.

The no7 Opel was second again on the fifth and final stage of the day with 5.7, while the no6 1976 Polski Fiat 125 P of father and daughter crew Piotr Cisowski and Natalia Cisowska on 5.6, putting the Polish duo in third place at the end of the day with a total of 43.

The second leg of the Alpine Challenge will begin at 08h00 from the Parc Fermé at Tennis de Villars tomorrow morning.

North Korean defector recaptured in China after more than 40 days...

Iran nuclear talks restart as participants draw their lines in the...

Bugatti is the jewel in Volkswagen’s crown. This 33-year-old is taking...