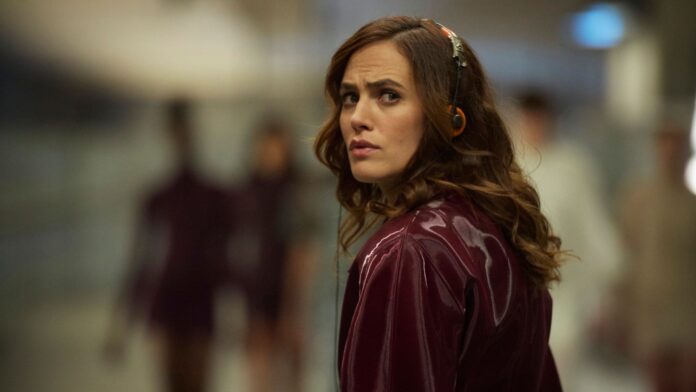 This year may feel dystopian enough for some, but if you can handle more weirdness then new TV show Brave New World might be up your street.

The Sky One show has been adapted from the classic Aldous Huxley novel of the same name and is set in New London, where privacy and monogamy have been outlawed, everyone is connected via AI technology, and popping happy pills is part of everyday life.

The rules mean everyone is encouraged to have a variety of sexual relationships – leading to plenty of adult scenes.

“Something has drastically changed in our industry since when I started, which is now you are allowed to have autonomy of your own body,” she said.

“Working with intimacy co-ordinators you get to choose day-to-day, scene-to-scene, moment-to-moment what it is that you are expressing and how comfortable you are with doing whatever is on the page.

“It’s no longer sort of a ‘you owe us a boob, please’ situation, which it really was starting out.”

Brown Findlay said she felt empowered by the material.

“When you empower someone and enable everyone to feel safe… you’re actually emboldened by the whole process and you feel, in fact, safer than you’ve ever felt before.

“For me, in a way, I never think of it as explicit or even intense in that way, because I never, ever felt like that, I was never made to feel like that, so that’s pretty great.”

Game Of Thrones star Harry Lloyd plays one of the lead characters, Bernard Marx, who is struggling with the life that is expected of him.

He told Sky News’ Backstage podcast that living through lockdown has put a new spin on the series.

“People like Lenina and Bernard are realising in the show that actually you can be connected, you know, all the way home, but you can still be very lonely, these connections are not real.

“That felt like it was very relevant and timely [at the time of filming], but of course, now this year, we’ve all spent coming up to a year physically separate and relying on this technology.

“Now we’re very much aware of how disconnected we are, despite the fact that we’ve got more connections and apps than we’ve ever had before.”

Brown Findlay agrees that technology is no replacement for real contact.

“There’s nothing quite like being in a room with people,” she said.

“It’s just a great reminder that even though technology offers so much there’s something very, very simple about holding space in rooms with other people in that way that can never really be taken out of the situation.

“I don’t think we’re ever gonna be fine with just sitting behind screens.”

Solo: A Star Wars Story star Alden Ehrenreich said working on the show made him consider his attitude to online privacy.

“I feel like there’s some reckoning coming within the next several years where we’re all going to realise that oh, clicking yes and okay to this thing, you know, whatever the website is, over and over and over again for years… the lack of privacy that we kind of sign up for because it’s convenient,” he said.

“We’ll kind of give up a lot of things for that convenience, and I think that our sense of privacy and security, which is yet to be really challenged for the average person in most cases, will be coming in contact with something. I don’t know what that looks like yet.”

Brave New World is out on Sky One and NOW TV. Hear more from the interview and a review of the show in this week’s episode of Backstage – Sky News’ entertainment podcast