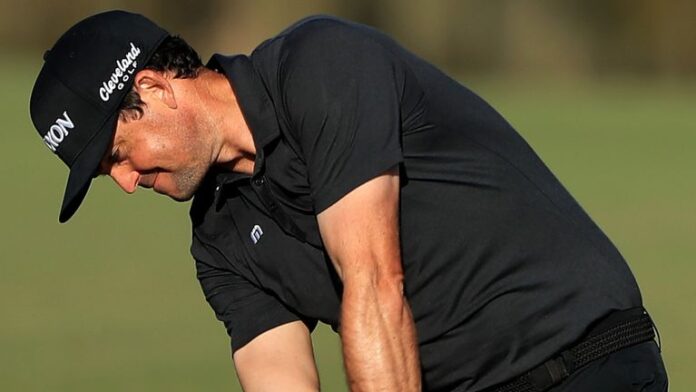 Keegan Bradley took advantage of a red-hot putter to move into a two-shot lead at the halfway stage of the Sanderson Farms Championship.

Bradley birdied four of his last six holes to close a seven-under 65 at Country Club of Jackson and take the four-time PGA Tour winner to 13 under, two ahead of Charley Hoffman and JT Poston.

After following back-to-back birdies over his first two holes by getting up and down from off the par-five third green to pick up another shot, Bradley ended a run of pars with a five-foot gain at the ninth tor each the turn in 32.

The former PGA Champion missed a six-footer to save par at the 10th but holed a 10-footer at the 13th for the first of three straight birdies, with Bradley then adding another from close range at the last.

“I had a blast today playing,” Bradley said. “It’s so fun to be done with the round, done with 36 holes and say, ‘Man, that was a fun time.’ Sometimes it’s not fun at all. What a great day, and I’m bringing a lot to the weekend that I’m happy about.”

Hoffman held a share of the overnight lead and followed his opening-round 64 with an erratic three-under 69 that mixed seven birdies with four bogeys, while Poston also got to 11 under after five birdies in a six-hole stretch helped him to a second-round 67.

Monday qualifier MJ Daffue is in fourth spot ahead of Denny McCarthy and Kristoffer Ventura, while Sergio Garcia heads into the weekend within five of the lead after a second successive 68.

Defending champion Sebastian Munoz dropped into a share of 12th that also includes Scotland’s Martin Laird, while overnight co-leader Jimmy Walker slipped down the leaderboard with a five-over 77.

Watch the Sanderson Farms throughout the weekend live on Sky Sports. Live coverage continues with Featured Groups on Saturday from 6pm via the red button, ahead of full coverage from 9pm.