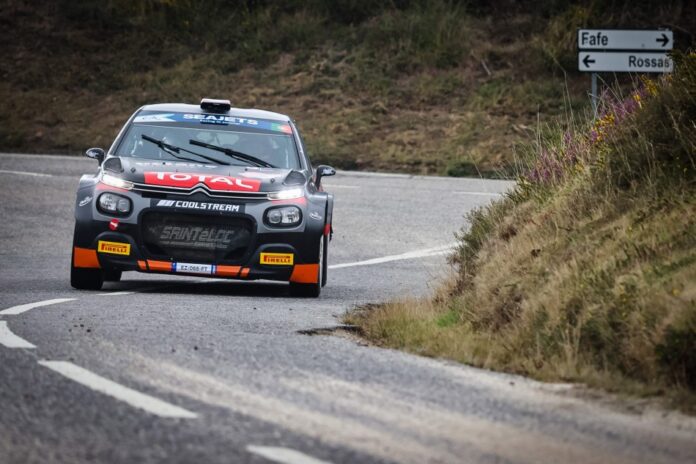 With stage conditions switching between dry, damp and wet, driver skill and tyre grip made the difference on a challenging day in northern Portugal, although compound choice presented a constant headache for crews and their teams based at the service park in Fafe.

Throughout leg one, drivers frequently selected tyres expecting dry weather to prevail only for localised showers to coat the stages with water and leave them struggling on covers unsuitable for the conditions.

Lukyanuk, driving a Saintéloc Junior Team Citroën C3 R5 on Pirelli tyres, was fastest on six of today’s nine stages to reach the overnight halt with an advantage of 38.3s following a dramatic final loop of stages.

“We built some gap and tried to control it,” said the Russian. “We had no drama, no moments so it looks like, all in all, it was not so bad today, even though we were struggling at times in the loops. It was a crazy experience [with the weather] but a positive feeling.”

Lukyanuk’s fortunes were in complete contrast to his main ERC title rivals running behind him through the all-asphalt stages. Craig Breen was in the podium fight when he got caught out on a coating of oil nearing the end of stage eight. Although he completed the run, he did so with the left-rear wheel missing from his Hyundai i20 R5 and would retire. It was poor reward for a strong performance, which earned Team MRF Tyres, an ERC newcomer for 2020, its first stage best in the championship on SS4 and underlined the progress being made by the Indian company’s tyre development programme.

After his family-run team worked through the night to fix his badly damaged Volkswagen Polo GTI R5 following his shakedown crash, Oliver Solberg was on course to pay back their efforts with third place, only for a power issue to develop on stage eight. It cost the 19-year-old ERC1 Junior Championship leader more than six minutes and another eight minutes were dropped as he limped through stage nine.

“It’s a blocked exhaust or whatever happens after that,” Solberg said at the end of SS9. “We ran out of oil and unfortunately it’s not been our weekend really.”

Unlike his closest rivals, Solberg had opted for wet-weather tyres for the middle loop, which he started in second place but completed in fourth. “It’s difficult to get exactly what you hope for,” said Solberg, whose mechanical issue was later traced to a turbo failure following checks in service. “We went for a risk with the wet tyre, which is exactly what we went for on the first loop. We tried but it didn’t pay off 100 per cent. On the dry sections you lose one second per kilometre but I’m learning and that’s what I’m here for.”

Behind Lukyanuk, Iván Ares emerged as the surprise of the day with a stage victory on his way to the provisional runner-up spot. Although he’s shown strong pace on the ERC-counting Rally Islas Canarias in the past, his performance in the difficult conditions in a Hyundai i20 R5 was exemplary.

“It was difficult but really good,” said Munster. “We made the best out of it, we tried to have the best choice but nobody had the perfect choice. It’s been a positive day but I don’t think about the podium. There are still nine stages to go and we only did half of the work. In these tricky conditions anything can happen.”

After going fastest in shakedown on Friday, ERC1 Junior Emil Lindholm crashed out on SS3 and won’t restart due to his Team MRF Tyres’ Škoda Fabia Rally2 Evo being beyond immediate repair.