Home Sport HRR – Decremer and Lienne Continue to Lead the Alpine Challenge on... 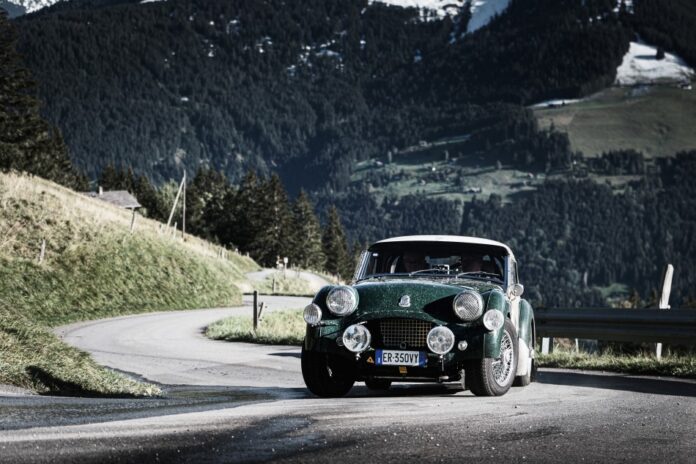 The no7 Opel Ascona 2000 of Belgian crew Michel Decremer and Patrick Lienne set the pace on a weather interrupted day 2 of the Alpine Challenge in Switzerland, the host event of the FIA Trophy for Historic Regularity Rallies.

With heavy overnight rain turning to snow at altitude, the first three stages were cancelled due to tricky road conditions along with several trees that had come down and were blocking the route.

Stage 9 saw the Belgian Opel Ascona set the pace once again with just 8 penalty points incurred, with Christian Crucifix and Yves Noelanders gathering just 9.6 points in second in the no10 1985 Porsche 911 Carrera.

Stages 10 and 12 were also casualties of the weather, which was starting to improve as the afternoon approached.  Stage 11 saw the Italian crew of Paolo Marcattilj and Francesco Giammarino gather just 3.1 penalty points in the no1 1954 Triumph TR2, just ahead of the no4 Lancia Fulvia Coupe of Maciej Trzebiatowski and Robert Skierski with 3.2 points.

Decremer and Lienne went ahead again on stage 13 with 5.1 points, with Marcattilj and Giammarino in second with 5.7, while on stage 14 it was the Triumph TR2 in front with 7.2 points ahead of fellow Italians Maurizio Aiolfi and Debora Guglieri in the no8 1981 VW Golf GTi.

Stage 15 was the final stage of the day and it was the no9 1983 Audi 80 Quattro of Maurizio Vellano and Giovanni Molina with 3.5 points, well ahead of the second-best car, the no3 1965 Morris Mini Copper S of Belgian pairing Jean-Jacques Martens and Aswin Pyck.

At the end of the second leg of the 2020 Alpine Challenge, Michel Decremer and Patrick Lienne had accrued 33.9 penalty points on the second day, bringing their total to 65 points.

The no3 Morris Mini Cooper of Jean-Jacques Martens and Aswin Pyck is still in second place with 86.4 points after gathering another 46.5 penalty points on the second leg.

The third-place car at the end of the second day was the no8 VW Golf GTi of Maurizio Aiolfi and Debora Guglieri after a good tally of 37.9 on the second leg to bring their overall total up to 91.6.

The third and final day of the Alpine Challenge will get underway at 08h00 with five more stages to be run on Sunday 4 October.