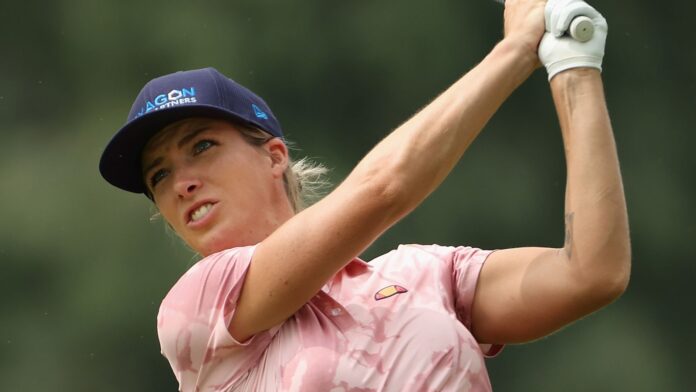 Mel Reid will take the lead into the final round for the second LPGA Tour event in a row after she fired a 66 on day three of the ShopRite LPGA Classic in New Jersey.

Reid led by two shots with 18 holes to play in Portland last week, celebrating her 33rd birthday with a 65, but she struggled to a 74 on the final day and finished two strokes behind champion and compatriot Georgia Hall.

The English ace will look to learn from that experience when she starts her final round over the Bay Course at Seaview looking to secure her maiden victory in the United States, while Hall slipped six off the pace following a disappointing 70 on Saturday.

Reid made a confident start with birdies at two of the first three holes, and she hit one of the shots of the year at the long ninth, her 230-yard second using the contours to roll down the slope to within six feet of the flag and set up an eagle-three.

Another birdie followed at the 10th, although Reid was unable to improve her score coming in and settled for eight straight pars, a bogey-free round, and the outright lead on 15 under par ahead of Jennifer Kupcho and Jennifer Song, who both carded 65s.

Asked what she learned from her mistakes on Sunday in Portland, Reid said: “Sometimes I get too quick and it kind of makes me quick on my swing, so I’ll just take my time tomorrow I think.

“That is basically what we kind of took away from last week. I was just rushing things a little bit and probably hitting shots I wasn’t quite comfortable with. Tomorrow I’m going to take my time a little bit more, and hopefully it will make a bit of a difference.”

While Reid prospered, it was a frustrating day for last week’s winner Hall as she failed to build on a bright start with back-to-back birdies at the third and fourth, giving shots back at six and eight.

Hall then had to wait until the 18th to claw a shot back and close on nine under alongside Solheim Cup team-mate Anne van Dam (69), with Jodi Ewart Shadoff adding to the English challenge with a 68 getting her to eight under par.