Home Sport Garcia tied at the top in Mississippi 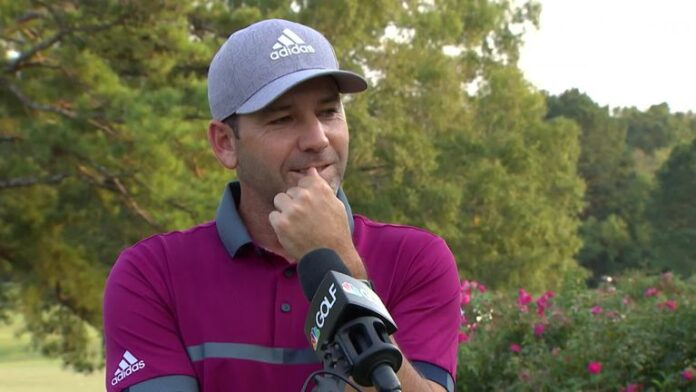 Sergio Garcia remained on course for his first PGA Tour win since the 2017 Masters as he claimed a share of the 54-hole lead at the Sanderson Farms Championship.

A day after his startling revelation that he won the Masters putting with his eyes closed, Garcia fired a bogey-free 66 to jump into a tie at the top with Cameron Davis, who surged into the early clubhouse lead with a superb 63, while JT Poston cost himself the outright lead when he bogeyed the 16th.

The Australian enjoyed a blistering start as he birdied each of the first five holes and didn’t require a putt longer than nine feet, although he did hole from longer range on the eighth as he raced to the turn in just 30 blows.

Davis then hammered a 265-yard second to inside 10 feet at the long 14th and converted the chance for eagle, and a bunker splash-out to tap-in range at the next set up his seventh birdie of the day before he parred safely home to stay at 14 under.

With overnight leader Keegan Bradley in damage-limitation mode following three bogeys in four holes on the front nine, Garcia stepped up and made significant strides towards Davis’ target with four birdies in five holes either side of the turn.

The Spaniard added another at the 15th and closed with three cast-iron pars to stay in a share of the lead, and he is enjoying his return to form after missing the cut in three of his last four starts, including the PGA Championship and the US Open – a run of results that have seen him drop out of the world’s top 50.

“I’ve just been feeling comfortable,” said the 40-year-old. “I obviously enjoy the course. and I’m just believing in myself, trusting myself. That’s what I have to do tomorrow, too.

“Obviously Sunday it’s always a little bit more difficult, but I’ve got to go out there and go through the same routine and just go with it, even if you stumble a little bit early on or something like that, just believe that what you’re doing is right, and that’s what I’m going to try to do.

Poston went clear at the top of the leaderboard with back-to-back birdies at 14 and 15 before failing to save par from a greenside bunker at the next as he returned a 69, while Brandt Snedeker enjoyed a four-birdie back-nine in a 67 which lifted him to 13 under along with Norway’s Kristoffer Ventura (68).

Bradley’s bid for a first win in just over two years took a knock when he bogeyed the fourth, fifth and seventh holes, but he did well to regroup and revived his challenge with and eagle at the 11th, and he parred in from there to remain just two behind the leaders.