Home Culture Graham Coxon: Forcing your opinion on others is ‘crackers’ 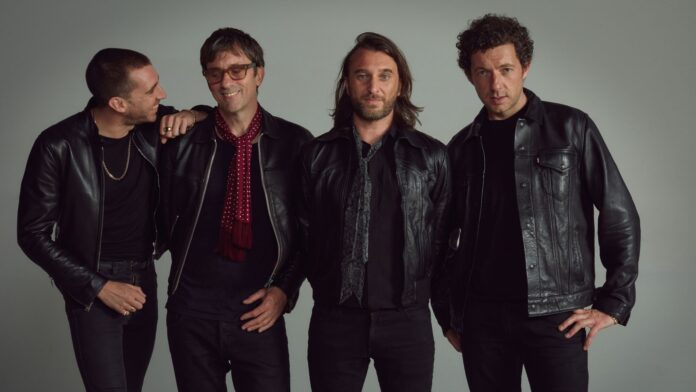 Like a lot of musicians, Graham Coxon’s touring plans had to be put on hold this year.

But unlike a few of his musical cohort, who have recently spoken out against measures aimed at controlling the coronavirus outbreak, the Blur guitarist tells Sky News he’s happy to stick to the rules.

“I do what I’m told really, I’m that sort of person, so my mask is worn when it should be, you know, I don’t like being told off,” he says.

“I think mass gatherings that are objecting to the wearing of masks, mass gatherings where they’re telling everyone to take their masks off and things like that, that’s daft – daft as brushes.

“I don’t really believe in forcing your opinions on other people, particularly. I mean, that’s crackers to me, there’s no need for that.”

The Blur star speaks to Sky News alongside Kane, who says he thinks some of those pushing back on coronavirus rules are doing so because they’re not sure what to believe.

“I think it’s probably just with the confusion with the orders of what’s been given,” he says. “It’s so confusing… the whole thing of the six, or the pubs closing at 10 o’clock but you can go on the tube, and you can do this… it doesn’t make sense, so I do understand it.”

The pair are talking to me at famous north London music venue Alexandra Palace, one of many which have taken part in a series of events this week to urge the government to do more to protect the live music industry.

Coxon says the creative arts are “the most important thing in the world for me”, and that they need protecting.

“Theatres music, visual, every kind of art,” he says. “I don’t want to see it in any way getting disrupted, but of course, it’s got to be.

“But there has to be some kind of life support for it, ‘cus it does bring in tonnes of dosh, you know – not just for pesky musicians but for everyone: theatre productions and everyone who is around them, road crews and just everybody involved. It’s a very challenging time.”

The Jaded Hearts Club’s debut record You’ve Always Been Here sees the group putting a new spin on vintage tracks – including hits you might not necessarily associate with the indie musicians, such as I Put A Spell On You, and Fever.

In fact, earlier this year, Muse star Bellamy told Sky News that as a covers band, they would be “100%” up for performing at weddings.

Whether that’s true or not, one thing the band would usually be doing is playing a string of live gigs to promote the release.

“It’s like the perfect festival band really, every song is so uplifting and great and a singalong,” says Kane. “It is a shame it can’t be on the stage at the moment.

“Especially to back up a release of something, it would have been something special, you know, but it is what it is.”

While some musicians have pivoted to streaming live gigs in empty venues to a virtual audience, Kane says this isn’t something that appeals to him.

“That doesn’t seem to excite me… Obviously, if you’re a fan of someone, it’s good to see them but I like that real thing,” he says.

“Unless you did something that was really creative, and had sort of maybe a story behind it, but I think playing a streamed gig in an empty hall is quite depressing, really.”

Coxon says that even making videos for the singles has been a strange experience.

“I was setting up with my iPhone on one of the dining chairs against a free wall I have,” he says. “And then go down to Queen’s Wood and do my eight seconds for Put A Spell On You.

“Pepper, my daughter, was filming me and I was wriggling around on the floor, and it wasn’t so dark that there wasn’t people still walking about.”

And while Coxon is currently busy with The Jaded Hearts Club, he says has hasn’t ruled out doing more work with Blur in the future.

“Well, we haven’t talked about it very much,” he says. “But it’s still a band, you know – we haven’t officially put the shutters down on anything.”