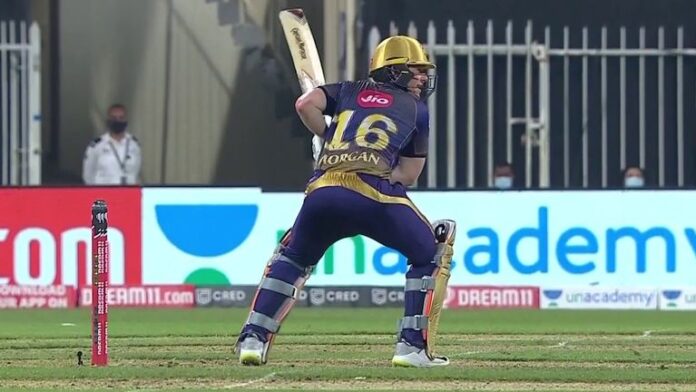 Delhi Capitals skipper Shreyas Iyer slammed an unbeaten 88 from 38 balls to take his team top of the IPL standings with victory over Kolkata Knight Riders at Sharjah.

Iyer’s innings, which included seven fours and six sixes, backed up a belligerent 66 by opener Prithvi Shaw and enabled Delhi to post a commanding 228-4 – the highest IPL total made at the ground. SCORECARD

That proved just too many for the Knight Riders – although Eoin Morgan’s late flurry of sixes, hitting 44 from only 18 deliveries, almost pulled off what would have been an astonishing win as they came up short at 210-8.

The Capitals’ 18-run victory was their third on the spin and lifted them into top spot, dislodging Royal Challengers Bangalore – who had breezed past Rajasthan Royals by eight wickets earlier in the day – on run-rate.

Put in after Iyer had lost the toss, Delhi quickly took advantage of Sharjah’s short boundaries as Shaw (66 from 41) and Shikhar Dhawan raced to 56 inside the powerplay overs.

Dhawan (26) swept Sunil Narine for successive sixes before attempting to repeat the shot against Varun Chakravarthy and top-edging to backward square, where Morgan held on.

Although two tight overs from Andre Russell briefly stemmed the flow of runs, Shaw then pressed the accelerator, giving spinner Kamlesh Nagarkoti the charge and bringing up his half-century with a colossal six.

Nagarkoti belatedly took his revenge, persuading Shaw to mistime a drive into the hands of long on – but Iyer, who batted without a helmet, looked utterly fearless as he took the Knight Riders’ attack apart.

The captain was ably supported by Rishabh Pant, who thrashed 38 from 17 – even flaying the wily Russell (2-29) for three boundaries in a row as the pair steered Delhi past the 200 mark with two overs to spare.

Faced with a daunting victory target of 229, KKR suffered an early setback when Anrich Nortje – whose first ball had sailed over the wicketkeeper’s head for four byes – beat Narine with his second and struck off stump.

However, Nitish Rana got the innings moving by clubbing Ravi Ashwin – back in the Capitals side after recovering from a shoulder injury – for two maximums as he and Shubman Gill (28) built a swift partnership of 64.

Amit Mishra should have removed Rana on 27, putting down a return catch, but the veteran leg-spinner did make the eventual breakthrough as Gill miscued a sweep to provide Pant with a straightforward catch.

Russell (13) gave the Knight Riders hope with two savage boundaries off Kagiso Rabada, but he perished skying to third man before Harshal Patel (2-34) picked up two wickets in as many balls, including that of Rana for 58.

At 122-6, KKR looked out of the game – only for Morgan, who hammered Rabada for three consecutive sixes, and Rahul Tripathi (36 from 16) to set Delhi nerves on edge as they took 78 from five overs.

But Nortje (3-33) had the England white-ball captain caught on the leg-side boundary before Marcus Stoinis yorked Tripathi in the final over to seal Delhi’s success.

Live coverage of the Dream11 Indian Premier League continues on Sunday with Mumbai Indians vs Sunrisers Hyderabad, live on Sky Sports Mix from 10.50am.