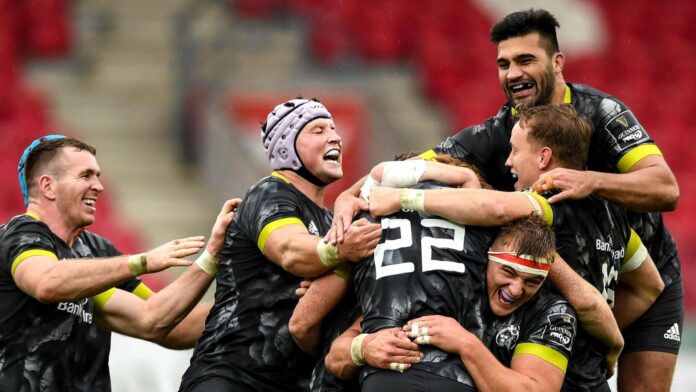 Recap all the updates from the opening round of the Guinness PRO14 as Munster beat the Scarlets late on, while Connacht beat Glasgow Warriors in Galway…

YESSSS!!!! Ben Healy kicks a last-minute penalty to secure a fantastic win for Munster away to Scarlets!#SCAvMUN #SUAF pic.twitter.com/FxcdiQNwuB

Leigh Halfpenny kicked nine penalties to break Scarlets’ record for most penalties in a match, surpassing the previous mark of eight set by Stephen Jones and Byron Hayward.

Halfpenny’s efforts appeared to have condemned Munster to defeat, particularly when Peter O’Mahony was red carded in the 68th minute after picking up two yellows.

However, the flanker’s dismissal proved the catalyst for a remarkable reversal of fortunes.

We get our @PRO14Official campaign off to a winning start in a hugely physical game.

Carty finished with 13 points and another of the province’s Ireland internationals, Quinn Roux, also touched down as the westerners defeated Scottish opposition for the first time since April 2017.

Glasgow’s pressure eventually paid off just before half-time, Adam Hastings slipping Nick Grigg through to make it 7-3 in response to Carty’s early penalty.

A run of tries from Aki, Roux, Huw Jones and Aki again produced some exciting exchanges. Tommy Seymour’s 70th-minute score made it 25-24, but Connacht held on thanks to a Carty kick with four minutes remaining.

Mat Protheroe scored a double on his first start for Ospreys as the Welsh side opened their Guinness PRO14 season with a dominant 25-10 victory in Edinburgh.

The Swansea-born wing, a summer signing from Bristol, showed his pace and class as he crossed in each half at Murrayfield.

The hosts had taken an early lead through a penalty try but Nicky Smith went over for the visitors with both sides down to 14 men.

Ospreys dealt with the torrential rain far better than Richard Cockerill’s side, who spilled high balls on a number of occasions as they suffered a fourth consecutive defeat.

Second-half tries from Marcell Coetzee and Adam McBurney brought Ulster a hard-fought bonus-point win over Benetton Treviso in the Pro14.

James Hume, Stewart Moore and Michael Lowry also scored in a 35-24 win in front of 600 supporters at Kingspan Stadium.

Leinster began their Guinness PRO14 title defence with a 35-5 bonus-point win over Dragons.

The three-in-a-row champions, who fell short against Saracens in Europe a fortnight ago, coasted to victory despite losing captain Jonathan Sexton to a suspected hamstring injury in the first half.

Three weeks out from Ireland’s rescheduled Six Nations clash with Italy, Sexton was a precautionary withdrawal as Leinster reeled off tries from Garry Ringrose, Jordan Larmour and James Lowe to lead 21-0 at the break.

Cardiff Blues got off to a winning start in the Guinness PRO14 with a 16-6 victory over Zebre despite playing most of the second half with 14 men.

With the Welsh side leading through Josh Adams’ first-half try, team-mate Josh Turnbull was sent off in the 43rd minute by Irish referee George Clancy.

The number eight was dismissed for a shoulder to the head of Zebre flanker Maxime Mbanda, with the lead cut to 10-6 once the resulting penalty was put through the posts.

However Cardiff managed to grow into the game and took control with kicks from Jarrod Evans and Jason Tovey, with the former finishing with eight points as well as creating Adams’ try with a well-judged kick through just before the half-hour.