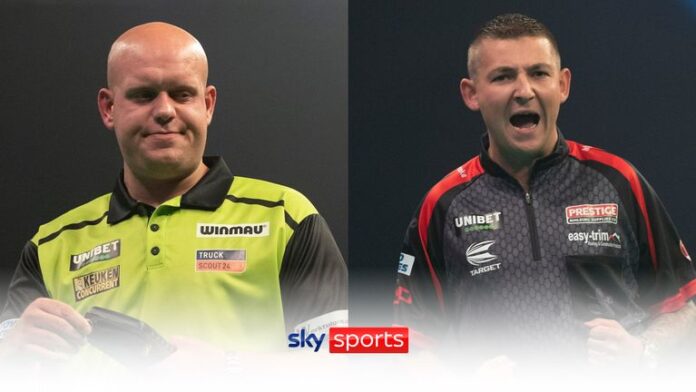 Watch all seven days of the World Grand Prix on Sky Sports – coverage begins on Tuesday, October 6 at 6pm

The draw for the World Grand Prix threw up a host a mouthwatering matches, with major champions colliding from the off.

Wayne Mardle could have picked all 16 but we put him on the spot to pick out the five that might mean just a little bit more and why they do.

The match that………MVG must not lose

Krzysztof could go a long way if he beats Michael but it’s a huge game for Michael, who will not want to get beat again early in a tournament. He will want to make amends.

The match that…………means more than most

This sticks out to me and it is a huge game for Adrian.

He’s got to stop the slide. He got into the Grand Prix by the skin of his teeth. If Jonny Clayton had won the European Tour event at the weekend and not Devon Petersen, Adrian would not have been 16th in the world and not have qualified on the Pro Tour Order of Merit.

Dobey is going to get chance after chance and he reached the semi-final on debut last year – he will be there for years to come but Lewis, I don’t know anymore. I see it is a real big game for him.

If he can just win again and then get through to the second round best of five then he might be able to relax just a bit, but he does not seem to be able to put in any performance that allows him to.

It’s got to that point now that the poor results are coming more frequently. I think this is a real real big event for him because if he drops out the top 16 he will not qualify for a lot of the events

The match that…………..anyone could win

What’s the game you just do not want to touch, the game where either could rattle off six legs on the bounce and the other one has no chance to even reply? There’s only one game and that’s Chizzy v Duzza.

Chizzy likes this event, he’s twice been a runner-up, but Durrant was a semi-finalist last year on debut but you could say that about any TV event and him last year.

Whoever wins that game, I would think ‘I expected it to go that way no matter how it goes’.

I suppose it could also apply a little bit to Gary and Rob, two guys who maybe do not have to look too far back for good form but will be hoping for another big win.

I’ve said it before and I’ll say it again, how Rob keeps reaching finals and winning tournaments with the way he has played for the last 18 months only one man can do that and that is Michael van Gerwen – so I take my hat off to him.

Cross finds a way he finds away how he got to the final of the World Series Finals only he will know.

Gary looked a million dollars in the in the Premier League

The match that……turns back the clock

That sounds such a vague and nonsense thing to say, but all any player wants to do whether it be golf, snooker or otherwise is the freedom to play and he looks like he’s playing with freedom for the first time in a long time.

His results have not been great but some of his performances have been better than his results and I think he takes care of Jamie Hughes.

Darts is back on to Sky Sports in October with the World Grand Prix and the Premier League Play-Offs. Follow us @SkySportsDarts to stay up to date with all the news.

At least 50 people infected with Omicron variant at Christmas party...