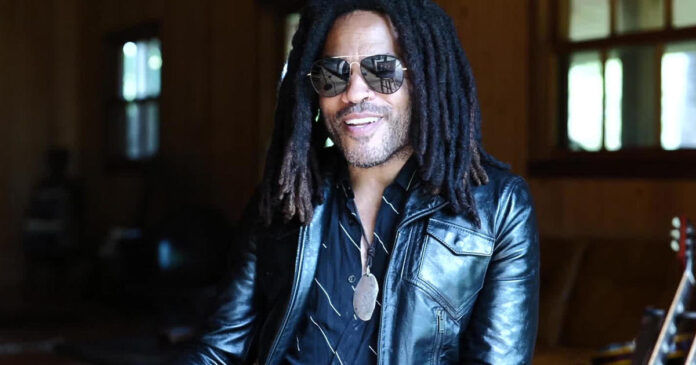 For Lenny Kravitz, it’s been a year of introspection spent at his home in the Bahamas. “I’ve been busy taking in life, living in the moment,” he said. “I’m trying to take in as much nature and quietness.”

Quietness and Kravitz haven’t often been a duo since Lenny hit the stage three decades ago. Over the course of 11 albums and countless live performances, Kravitz has established himself as an avatar of the hip, sensual rock star, selling 40 million records in the process, and winning the Grammy for Best Male Rock Vocal Performance a record four times in a row.

How did a biracial kid from New York City end up here? Kravitz has the answer in his new memoir, “Let Love Rule,” out this week. It’s an origin story. “I didn’t want the book to be about rock stardom, fame, any of that,” he said. “This was about getting there, finding my voice.”

In his tale, Sy Kravitz, a Jewish TV news producer, met and fell in love with Roxie Roker, a Christian African-American actress. “They faced a lot of challenges being an interracial couple,” Kravitz said.

Starting with his own family. “CBS This Morning: Saturday” co-host Michelle Miller asked, “His parents didn’t go to the wedding?”

“No. First of all, they were upset that she wasn’t Jewish,” Kravitz laughed. “And then there was more! So, they did not come. But when I was born, they came around. They wanted to see their grandson. They met my mother, they ended up loving her very deeply. So, they learned.”

Dad was a disciplinarian. But mom, he said, “was gentle and kind and fair. And she nurtured me.”

“She’s like, ‘If you ever get lost, you walk up to a policeman and you sing this song,'” he said.

By his account, it was a charmed childhood, enriched by his parents’ extraordinary circle of friends. Actress Cicely Tyson is his godmother, Diahann Carroll, an honorary aunt.

“I’d go see this guy play the piano with his orchestra,” he recalled. “I used to sit on his lap while he played. It’s, like, OK this is Duke Ellington. But you don’t realize like that until you get older!”

Miller asked, “Do you think they influenced you?”

“Absolutely. I had no choice. It was via osmosis.”

But he says that it was a Jackson 5 concert that sparked his career: “That was my first concert. My father took me to at Madison Square Garden. It transformed my life. The next day, I knew that music was my life.”

For the Kravitz family, “The Jeffersons” theme song meant a move to Los Angeles. Lenny’s mother was cast in the hit series playing Helen Willis, whose husband was White – a big deal back in the ’70s.

Miller asked, “Did you realize how controversial this show was in bringing the first interracial marriage on television?”

“I was living the controversy, right? So, I just think it was very interesting that my mother was dealt these cards, because here she was living this life.”

As a teenager in his new hometown, life was less about school and more about choirs, bands, and some struggles about his identity as a performer. He tried blue contact lenses. He started calling himself Romeo Blue.

“I was not comfortable with myself at the time,” he said. “There was David Bowie and Prince, and Lenny Kravitz just didn’t fit in. But the exercise of going outside of yourself, changing your look, changing your name, led me right back to myself. So, it was a necessary part of the process. I was enough. And my name was correct.”

But discovering an authentic sound took some time to figure out. Mostly he knew what he didn’t like. A friend asked him to record a song he thought might be a hit, “Somebody’s Watching Me.” It was a hit, but Kravitz turned him down.

Then, a label executive proposed that he play in a black band modeled after Duran Duran. He said no to that, too.

Not every artist has a muse. But Kravitz found his one night when an elevator door opened. There stood Lisa Bonet, then television royalty playing Denise Huxtable on “The Cosby Show.”

Miller asked, “And you had a great opening line, didn’t you? Or not-so-great?”

It worked! Both biracial, both half-Jewish, in time they eloped to Las Vegas.

Miller asked, “Why do you think the two of you clicked?”

“We had the same spirit. It was magical. And through that experience, I finally found my sound without any effort. It just came.”

He crafted a genre-blending mix of funk and rock into his debut album, “Let Love Rule.” The execs at Virgin Records liked what they heard, a lot. Kravitz recalled, “As the song was playing, they were writing and passing things back and forth. And after the meeting, I saw on the paper that it said, ‘Prince meets John Lennon.'”

And Kravitz soon met his fans – first in Europe, then in America.

“Music for me is oxygen,” he said. “I can’t live without music. It’s the primary way that I express myself.”

And it’s how he processed his divorce from Lisa Bonet. Their daughter, Zoe, is now an actress and married herself. Kravitz gets along so well with Bonet’s new husband, Jason Momoa, they even have matching rings.

“We’re a family,” Kravitz said. “We’re one family. And that is what ‘Let Love Rule’ is all about.”

Through his memoir and his 11 albums, the man who was briefly Romeo Blue has shown us the many shades of Lenny Kravitz, an artist who says he remains “hungry” and “inspired” … and ready for whatever comes next.