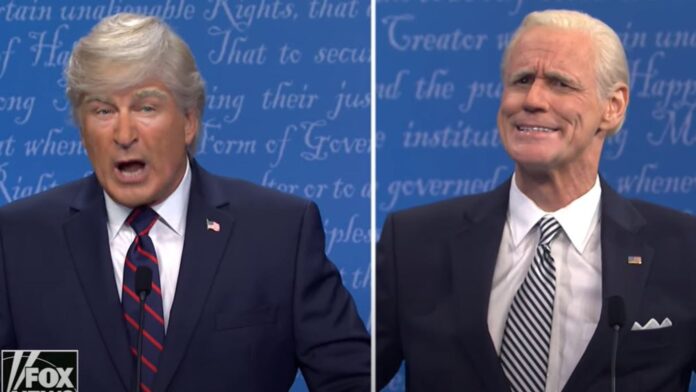 Saturday Night Live opened its 46th season with a parody of Tuesday’s US presidential debate.

The comedy performance satirised the first election debate – which was characterised by its name calling, insults and the two politicians consistently speaking over each other.

Meanwhile, Carrey’s Biden tried to hold his anger – breathing into a brown paper bag and talking to himself.

At the start of the skit, Rock came onstage donning a mask, before taking it off to perform his set to the studio audience of about two dozen people – all wearing masks.

The four-time Emmy Award and three-time Grammy award winner opened his set by joking about how the pandemic had ruined much of his year.

He also sarcastically displayed sympathy about the president being hospitalised after his coronavirus diagnosis.

“President Trump is in the hospital from COVID, and I just want to say that my heart goes out to COVID,” he joked.

The comedian also shared his thoughts on American citizens needing to “renegotiate their plans” with the American administration.

He said: “What job do you have for four years no matter what? Just show me one job. If you hired a cook, and he was making people vomit every day, do you sit there and say ‘Oh, he’s got a 4-year deal,'” he said.

Rock added: “We just got to vomit for four more years.”