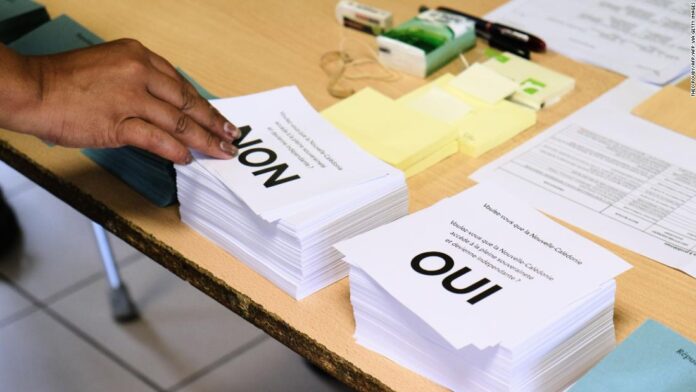 More than 53.2% of voters said they wanted their territory to remain French, delivering a result that French President Emmanuel Macron welcomed “with a deep sense of gratitude” and “humility,” in a solemn address from the Elysée Palace in Paris.
Despite the overall result, support for independence is growing in the New Caledonia, which was colonized by France in 1853. More than 46.7% of ballots cast were in favor of independence, up from 43.3% in the last vote in November 2018.
Turnout was over 85% as the poll took place without any masks or social distancing measures. The pandemic has largely spared the archipelago, which has kept Covid-19 case numbers very low by drastically reducing international flights and imposing mandatory quarantine for all arrivals.
The referendum was part of a decolonization plan under the Nouméa Accord, agreed in 1998, which ended a deadly conflict between the mostly pro-independence indigenous Kanak population and the descendants of European settlers. Another referendum can be held by 2022 if at least a third of the local legislature requests it.
Located between Australia and Fiji, New Caledonia gives France a strategic foothold in the Pacific Ocean, where China is expanding its influence, as well as important nickel reserves. It has a population of 270,000.

Bugatti is the jewel in Volkswagen’s crown. This 33-year-old is taking it over

Westpac to likely pay $81 million for allegedly charging dead people, among other breaches

Raffles London at the OWO to open in late 2022

North Korean defector recaptured in China after more than 40 days...

Iran nuclear talks restart as participants draw their lines in the...

Bugatti is the jewel in Volkswagen’s crown. This 33-year-old is taking...