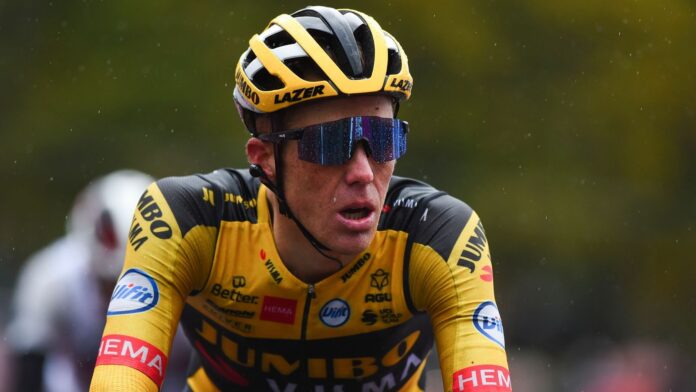 Steven Kruijswijk was one of two riders to test positive for coronavirus after the first rest day of the Giro d’Italia, while the entire Mitchelton-Scott team have withdrawn from the race after four cases among staff members.

Jumbo-Visma named Kruijswijk after Giro organisers RCS announced that two riders – one from Jumbo-Visma and one from Team Sunweb – were among eight positive tests returned from 571 conducted since the conclusion of stage nine on Sunday evening.

Kruijswijk stood 11th overall, one minute and 24 seconds behind race leader Joao Almeida, and was one of the favourites to win the Giro d’Italia.

The other rider has not been named, but Mitchelton-Scott announced they would withdraw from the race entirely after four positive tests among staff members. It comes after their rider Simon Yates, another main contender, withdrew on Saturday morning after testing positive.

Brent Copeland, general manager of Mitchelton-Scott, said: “Unfortunately we received the news on Monday evening that we have returned a number of positive COVID-19 results to members of our staff after our third round of tests in three days.

“As a social responsibility to our riders and staff, the peloton and the race organisation we have made the clear decision to withdraw from the Giro d’Italia.

“Thankfully those impacted remain asymptomatic or with mild symptoms, but as an organisation the health of all of our riders and staff is our main priority and we are now focused on safely transporting them to areas where they are most comfortable to conduct a period of quarantine.”

The Giro continues on Tuesday with stage 10 from Lanciano to Tortoreto.