Home Culture ‘The Trial of the Chicago 7’ is worth watching, but it’s not... 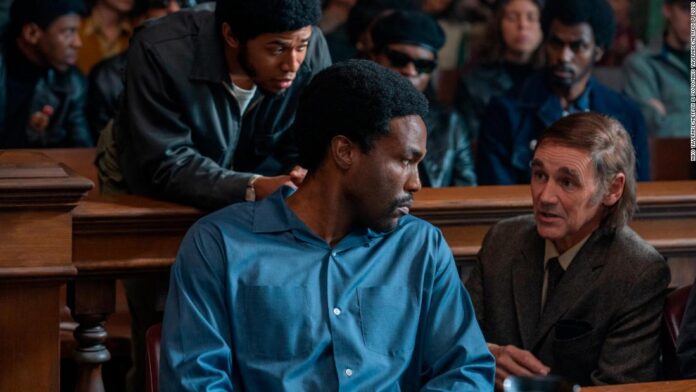 The film (hitting Netflix after a few weeks of theatrical availability) certainly attracted a dazzling cast, portraying the antiwar activists who the Nixon administration — and especially Attorney General John Mitchell — wanted to make an example of, charging them in a wild, widely publicized trial that dragged on for months.
The case grew out of unrest at the 1968 Democratic National Convention in Chicago, as police cracked down on protesters led by Tom Hayden (Eddie Redmayne), Abbie Hoffman (Sacha Baron Cohen) and Jerry Rubin (“Succession’s” Jeremy Strong), among others. Also on trial, for political reasons, was Black Panther Bobby Seale (Yahya Abdul-Mateen II), who kept objecting to his inclusion with the others and at one point was gagged to silence his outbursts.
As for the trial’s key players, they include Mark Rylance as defense attorney William Kunstler; Joseph Gordon Levitt as Richard Schultz, the ambitious young prosecutor assigned the case; and Frank Langella as presiding judge Julius Hoffman, who did nothing to hide his contempt for the defendants and willingness to tilt the scales of justice in the government’s favor.
That represents, by any measure, an abundance of firepower — even before Michael Keaton shows up as former Attorney General Ramsey Clark — and Sorkin does his best to maximize those assets.
Yet while it’s a strong showcase for the actors, the movie — the acclaimed writer’s second directorial effort, following “Molly’s Game” — doesn’t fully deliver on its promise, perhaps in part because there’s so much to juggle, including squabbling among these colorful personalities and the inevitable flashbacks to what transpired.
Those few objections noted, “The Trial of the Chicago 7” is very much worth watching, as much for what it says about what’s happening in America now as 50 years ago. The parallels with the tumult surrounding the Vietnam period might appear obvious, but the movie serves as a bracing reminder that the US continues litigating aspects of a cultural war that began in the ’60s and has been fought, on various fronts, ever since.
Movies also can’t be divorced from the context in which they’re released, and by that measure “The Trial of the Chicago 7” stands a little taller. As Sorkin (whose pertinent offerings range from “The West Wing” to “The Social Network”) says in the production notes, “The script didn’t change to mirror the times, the times changed to mirror the script.”
To paraphrase Bob Dylan, the times are indeed a-changin’, but Sorkin’s brand of sharp writing about politics, media and culture hasn’t gone out of style. And even if the movie doesn’t fully do justice to the story within its sights, on Netflix, the whole world doesn’t have to watch to be a success.
“The Trial of the Chicago 7” premieres Oct. 16 on Netflix.