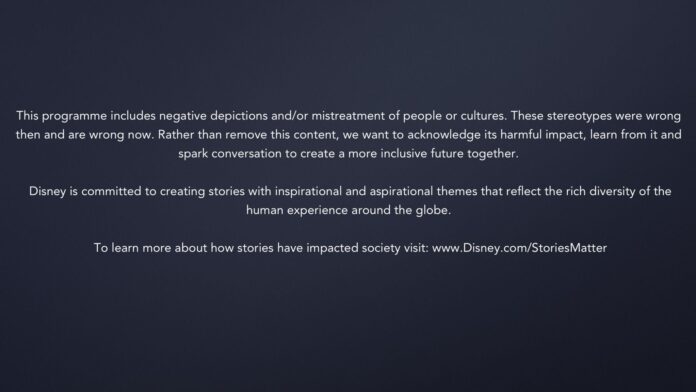 Disney is now issuing tougher warnings against racial stereotypes in some of its classic films on its Disney+ streaming service.

Original cartoon versions of movies such as Dumbo, The Jungle Book, Peter Pan, Lady And The Tramp, Aladdin, and The Aristocats now feature a stark message condemning some of the characters.

Subscribers to the service will see the following message when they click on certain films: “This programme includes negative depictions and/or mistreatment of people or cultures.

“These stereotypes were wrong then and are wrong now. Rather than remove this content, we want to acknowledge its harmful impact, learn from it and spark conversation to create a more inclusive future together.

“Disney is committed to creating stories with inspirational and aspirational themes that reflect the rich diversity of the human experience across the globe.”

Last year, Disney featured a shorter disclaimer message on some of its films. It read: “This programme is presented as originally created. It may contain outdated cultural depictions.”

Several Disney films have been criticised in the past for how they portray stereotypes of people from different countries.

Nearly every film, regardless where it is set, features the protagonists as having north American accents.

Whereas in movies such as Aladdin, the evil characters have non-American accents, such as Gazeem and Jafar.

The opening song in the film, Arabian Nights, also features offensive lyrics, such as describing the fictional city of Agrabah, the place where the movie is set and thought to be based on South Asia and the Middle East, as “barbaric”.

In Dumbo, a leader of a group of crows is called Jim Crow, a reference to the racist laws that allowed segregation until 1965, and walks like the Jim Crow caricature, which featured on posters during that time.

The Aristocats, which is set in France, features a Siamese cat called Shun Gon, that plays the piano with chopsticks and sings racist lyrics.

In a similar vein, Lady And The Tramp featured two Siamese cats, Si and Am, who are evil characters and sing a song that contains racist tropes.

In 2013, author Marcus Hunter wrote the feline pair were “undoubtedly conjured” by anti-Asian prejudices that some Americans had after World War Two.

He said on culture blog Flavorwire of the characters: “They have no individuality; their innocent blue eyes bend into a sinister glare as they cave at the slant. They are jaundiced and sly; sick and feral; domesticated, though nevertheless propelled by their mischievous, impish nature to deceive and intimidate.”

The character of King Louie in the Jungle Book has been criticised too for being a racist caricature of African-Americans, while Peter Pan characters describe Native people as “redskins”, a derogatory term.

Most movies also were voiced by white American actors.

Remakes of the cartoon films in recent years have had scenes or songs cut or improved casting to make it more ethnically diverse.

Tony Blair: The pandemic could push 49 million Africans into extreme...

A Chick-fil-A employee saved a boy from choking in the drive-thru...