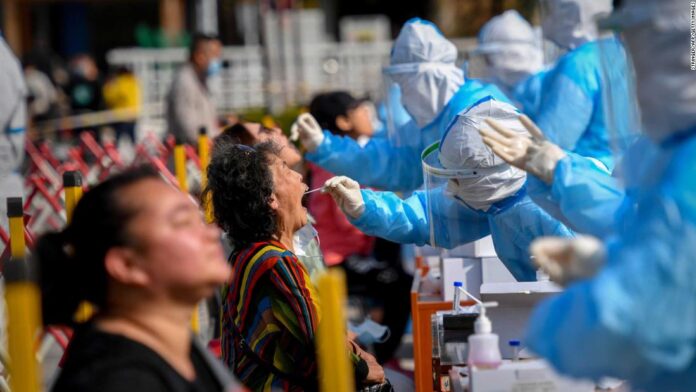 A total of 12 locally transmitted cases were reported last weekend at the Qingdao Chest Hospital, sparking fears of a wider outbreak. City officials took immediate action and in just four days, they tested more than 10 million people, according to Qingdao’s Information Office.
So far, no new cases have been identified in relation to the cluster. One new case has been found, separate from the cluster.
The two dock workers, named Dong and Chen, tested positive for Covid-19 on September 24 and were sent for treatment and quarantine at Qingdao Chest Hospital, according to city officials.
Officials said that the men had CT scans, and the room was not disinfected in the correct way — contamination that then caused the hospital cluster.
Qingdao is a large port city on China’s eastern coast, home to numerous beaches and popular with tourists.
Already, heads are rolling; the director of the Qingdao Health Commission and the president of the Qingdao Chest Hospital were removed from their posts on Thursday, according to a statement from the city government.
China has had the virus under control since early spring. There have been a few flare-ups, including one in the capital Beijing, but authorities managed to contain each cluster within a few weeks using mass testing, thorough contact tracing, and reimposed restrictions.
Chinese authorities are able to test so many people so quickly because of batch testing — a method that combines 10 samples at a time during testing. If any batch turns out positive, then all 10 people are quarantined and tested individually.
“We need to test the entire population within five days,” said Zhang Huaqiang, deputy director of the Qingdao Center for Disease Control and Prevention, at a news conference on Wednesday. “Our workload is very large, and our time is very tight.”
The method is efficient — but some question its effectiveness, given that patients are usually identified over a range of time. An infected patient might test negative, then days later test positive — so hidden cases can’t all be caught at once.
“This is just a snapshot, so it definitely will miss a lot of positive individuals,” said Dr. Jin Dongyan, a virology professor at the University of Hong Kong, on Wednesday.
More than 600 million domestic tourists traveled this month for Golden Week, a national holiday around the Mid-Autumn Festival; the Great Wall was packed with visitors, and many other sites were also filled with tourists eager for a change of scenery after months of staying home.