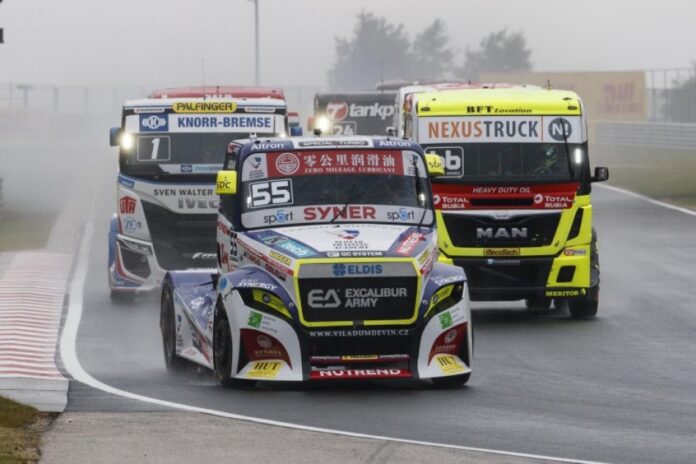 Czech Racer Adam Lacko left his competition in the rain, as he drove home a solid victory in the first race on Saturday.

Adam Lacko left his competition in the rain, as he drove home a solid victory in the first race on Saturday.

The race was started under yellow flags as the rainy conditions from the morning sessions hadn’t yet improved.

Once the race got underway on lap 2, Lacko pulled out a gap at the front whilst the 4 drivers behind him stayed close to each other. The Buggyra Zero Mileage driver seemed to be on a rocket ship as the gap to Janiec in second grew bigger each lap. When he finally crossed the finish line, Lacko had a huge 24-second advantage over second place.

Anthony Janiec, who initially crossed the line in second, continued his great form from the morning sessions, however he got hit with a penalty for track limits which saw him drop back into seventh in the final standings.

Local hero Norbert Kiss, who started the race from fifth, got close to Antonio Albacete a few times and finally overtook the Spaniard on lap 9 to move into fourth place. The Hungarian was now hunting down Jochen Hahn ahead of him. Kiss made quick work of the German and passed him on the penultimate lap to take second with the German finishing in third.

After an eventful race that saw plenty of on-track action, local hero Norbert Kiss took the victory in race 2 on Saturday afternoon.

The second race of the day saw plenty of action with Steffi Halm starting from pole position.
With 7 laps to go the race had to be stopped and was resumed after an hour and a half under yellow flags.

Kiss took over the lead from Steffi Halm after the race went green and pulled away from the field.

Adam Lacko managed to get past a fighting Antonio Albacete and also overtook his team mate Téo Calvet for second place. The French driver also secured the win in the Goodyear Cup.