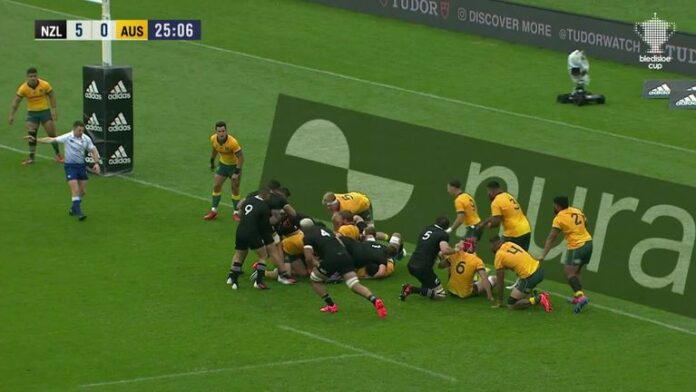 Brandon Paenga-Amosa called into the Australia starting line-up; Watch New Zealand vs Australia live on Sky Sports at 3am on Sunday

Centre Rieko Ioane has been dropped from the starting line-up by New Zealand for Sunday’s second Bledisloe Cup Test against Australia, live on Sky Sports.

The outside centre crossed the line in the drawn first match last weekend but failed to ground the ball properly, costing his team a try.

Anton Lienert-Brown replaces Ioane, as coach Ian Foster makes four changes to his starting line-up from the 16-16 draw in Wellington.

Twice world Player of the Year Beauden Barrett, a late injury withdrawal from the first Test, returns at full-back in place of Damian McKenzie.

Caleb Clarke will make his first Test start on the left wing in place of George Bridge, who has been sidelined for up to six weeks with a chest injury.

Injury has also handed lock Tupou Vaa’i his first run-on start in place of Sam Whitelock, who was ruled out of the Eden Park match because of a concussion.

Dane Coles replaces Codie Taylor at hooker, with the latter dropping to the bench alongside uncapped prop Alex Hodgman and lock Scott Barrett, who returns after a four-month injury lay-off.

Australia coach Dave Rennie has dropped No 8 Pete Samu in a back-row reshuffle, while hooker Folau Fainga’a has also been left out, after struggling with his lineout throwing in Wellington.

Brandon Paenga-Amosa will win his fifth cap in the middle of the front row, while Ned Hanigan has been named to start at blindside flanker, shifting Harry Wilson to No 8.

Live coverage of New Zealand vs Australia in the Bledisloe Cup begins at 3am BST on Sunday on Sky Sports Main Event, Mix and Arena

Paenga-Amosa edges out reserve hooker Jordan Uelese despite his own throwing troubles for the Queensland Reds during Super Rugby AU.

There are no changes to a backline that impressed in Wellington, but centre Jordan Petaia has been named on the bench after recovering from a hip flexor injury, replacing uncapped fly-half Noah Lolesio.

Australia will be looking for their first win at Eden Park since 1986.