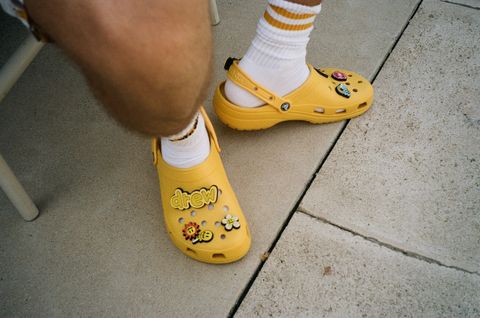 Some things in life are coincidences. Others are fate. I wrote about the Great Crocs Renaissance we are living in mere days before October 1, when my fellow Canadian homeboy Justin Bieber just so happened to hint at an upcoming Crocs collab. Hmmm. (Please just let me have this one.)

And JB, who just celebrated his first wedding anniversary earlier this month, is having an even bigger personal news day today, if you can believe it. After an Instagram post of Crocs floating in a pool with the cryptic caption “Soon”—which single-handedly caused the Crocs stock to jump 13 percent, its highest increase since 2007—Bieber officially announced his collaboration with Crocs on his Instagram on October 7. A play on the maybe three-months old by now cake meme, Bieber posted a video of him slicing into a red velvet version of his upcoming collab. We learned that the foamy clogs would drop on October 13. Know what today is?

Honestly, JB makes a strong case for socks and Crocs.

The JB clog is a classic yellow, and comes with eight Drew House Jibbitz. It’s nothing too wild or snazzy (unlike some Crocs collabs of recent history), and the untrained hypebeast eye would likely not even blink in passing a pair on the street. Respect. The limited-edition collaboration goes on sale at noon ET today, and the $59.99 shoe will be available on the Crocs website, in select Crocs retail stores in China and South Korea, as well as on www.thehouseofdrew.com.

As I have previously covered, Crocs is a seasoned vet at the limited-edition, hypebeast-bait footwear game. Celebs and brands of yestermonths Crocs collaborations include Post Malone, Bad Bunny, KISS, PLEASURES, and Chinatown Market. The highly anticipated chicken-scented Crocs x KFC collab sold out in less than thirty minutes this July, leaving shoppers rightfully upset online. The Crocs x Justin Bieber with drew Classic Clog will surely continue this storied tradition. There will be blood, tears, and resellers asking for an amount of money you could, potentially, use to buy a (very) used car instead.

Anyway, Happy Croctober (they have an advent calendar for Croctober, I did not make this up), from me and mine to you and yours. I’d start writing down your credit card info now to facilitate a quick copy/paste at checkout if you’re looking to get your hands on a pair of these bad boys.

Lauren Kranc Lauren Kranc is an editorial assistant at Esquire, where she covers pop culture and television, with entirely too narrow of an expertise on Netflix dating shows.

iOS 14.3: Apple releases the third beta with ProRAW support and other changes